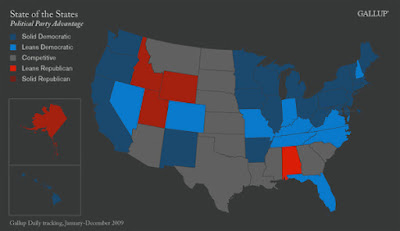 According to Gallup's newest party affiliation survey, the country is still overwhelmingly Democratic. The results identify 23 states (including District of Columbia) as "solidly Democratic," and 10 others as "leaning" Democrat. Only four states are identified as "solidly Republican" (Wyoming, Utah, Alaska, and Idaho). One state - Alabama - is identified as "leaning Republican."

The survey concludes with this bottom line: "Despite the modest shift toward a decreased affiliation with the Democratic Party and an increased affiliation with the Republican Party in 2009 compared to 2008, the United States remained a Democratically oriented nation last year. In all, 33 states and the District of Columbia were either solidly Democratic or leaning Democratic in terms of the political party leanings of their residents. Twelve states were fairly evenly balanced between Democratic and Republican supporters, and 5 states were solidly or leaning Republican."

Tennessee is a Democrat state?

Um, no. Firstly, it went to Bush both times and McCain this time arround. Seccondly, Franklin Tennessee outside of Nashville has the highest density of registered Republicans of any state, lastly- thier democrat governor is more conservative than Rush Limbaugh- supporting low taxes, right to carry, and the death penalty. He even cut health care spending.

Oh and I forgot Texas. Texas is competitive for Democrats? What planet is the guy who came up from this from Mars? I could go on, I mean Mississippi is not going Democrat helloooooooooo.

You've heard of the Gallup organization haven't you?

The poll is about party ID - Democrat vs. Republican. Perhaps the Republican party has been so degraded by the teabagger movements in some of the states you mention that their numbers are lower there. If you read the poll, a "solid" means one party polls 10% higher, "leaning" is 5%, and there are a number of even states. Nobody self-identifies as a Republican anymore. Based on the party's performance the last 20 years, I can see why.

Frankly, I don't want anything to do with Texas or Mississippi as they are among the worst places on earth (except Austin, TX which rules).

Uh, yeeeeaaaah I've heard of Gallop. You're talking to they guy with the bachelor's in poli sci here. I also heavily focused my math credits on probability and statistics. Thats why I can pretty much say the guy who came up with this poll is on crack... it flys in the face of about 30 years of political data.

And if we're tea bagger's you'd better get ready to open wide and suck those nutts because it's won ellections in New freak'n Jersey and Massachusetts for cry'n out loud. That also flys in the face of about 30 years of polling data but that shit actually happened.

Democrats carrying Texas on the other hand has a less of a probability of you seeing Jeasus in the next 20 seconds.

And you baggers love to take credit for things like electoral results. But, the guy in NJ is not one of you. He is a moderate. Scott Brown said yesterday that the tea parties had NOTHING to do with his election in Massachusetts (his words, not mine). Brown is a pro-choice moderate, who has voted in favor of health insurance reform. Not really a bagger either.

In NY 23, a confirmed, proud bagger lost the Congressional race to a Democrat. That seat had been in Republican hands since the 1870s.

Look, I wish you baggers had more influence than you did, so the GOP would be pushed even farther into the fringe. It would be awesome for the Democrats. Sadly, you don't. Hell, you couldn't even get more than 65,000 people to show up at your silly 9/12 march.

Splash, I think you are going to be horribly surprised, shocked, and dismayed come November.

The exit polls will be the only one that will matter to you progressives so that you can see why the hell the Democrats lost so many seats then.

its funny how history repeats it's self.

Oh, and Brown campaigned on being the 41st vote... hmmm suppose he changed his mind when he saw Mass's failed socialized medicine policy that's bankrupting the state.

Spose the voters saw that too. As for Democrat wins in red states... thanks George Bush. However, he isn't President anymore and the agenda has changed. That personal responsibility, fiscal conservatism and constiutional law thing you're calling the fringe... that's main stream today pal.

Better get with the program.

Frankly, if polls and elections don't convince you of the wrongness of your opinions, then I'm not sure what a comment here will do.

It seems to me that in your world, if a poll places Dems in a good light, it is biased. If a poll shows them in a bad light, it reflects what the people really think.

If an election goes your way, then that is democracy in action and the will of the people has been done. When the election goes the other way...ACORN did it.

If you want to live in your narrow fantasy world where elections only matter if you get the results you want, and polls are only accurate when they reflect your personal views, then feel free.

It seems to me that in your world, if a poll places Dems in a good light, it is biased. If a poll shows them in a bad light, it reflects what the people really think.

If there was a poll that said 2+2=5 I'd say it was wrong. When polls say Texas as a State are in play for Democrats, thats like saying 2+2=5. Those numbers don't add up at all. It's math, opinion has nothing to do with it.

But we all know math isn't your strong suit anymore than spelling is mine.

You know, if you used the Firefox browser, you wouldn't even need spell check. It's built in. Just trying to help.

I refuse to use spell check outside of work because it forces me to overcome my dsylexia.

I refuse to use spell check outside of work because it forces me to overcome my dyslexia whih often autocorrects errors when I proof read or causes me to transpose numbers or letters.

The benifit is I can write left to right and read backwards. In fact, I don't read/write backwards, you all do!