A Brief History Lesson of the 21st Century 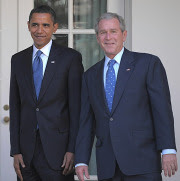 See the guy on the right? The white guy. Yeah, him. His name is George W. Bush. He was the 43rd President of the United States. For those of you right wingers who seem to have forgotten him, here's a little reminder. He was president from Jan 20, 2001 - Jan 20, 2009. In that time, the 9/11 terrorist attacks happened, so did the anthrax attacks, so did the shoe bomber, so did...you get the idea. Also, during that time, he started a war with Iraq. He claimed the country had weapons of mass destruction. It didn't. He claimed it had re-constituted its nuclear program. It hadn't. He claimed it collaborated with Al Qeada on 9/11. It didn't.

During his presidency, the country suffered a housing crisis, a near failure of our banking system, and suffered the greatest recession since the Great Depression. To "fix" the banking system, it was the Bush Administration that instituted the bank bailouts. The request for the money initially came in a 3 page memo. Three pages!! For nearly a trillion dollars. Naturally, the banks receiving the money did not have any new regulations put upon them.

The Bush Administration was among the most scandal and corruption plagued of all time. From bribing journalists to write favorable stories to personal aides busted for shoplifting, the Bushies did a lot of illegal stuff.

When he assumed office in 2001, the country had a budget surplus. When he left, we had a massive deficit. That's Bush. George W. Bush.

For the first six years of his presidency, he had a House of Representatives controlled by his party - the Republicans. For 1 1/2 years of that six, the Senate was tied 50/50 with the Vice President needed to break a tie. The rest of the time, the Republicans controlled the Senate, too. From 2001-2007, he never vetoed a single bill. Not one. In January 2007, the Democratic Party took control of both houses of Congress. Immediately after that, Mr. Bush fired his Defense Secretary and changed course on the failing Iraq War.

In the 2008 election, the other guy (the black guy) won the electoral votes of nine states carried by Bush. The election was largely considered a referendum on the job performance of Mr. Bush and the Republicans in Congress. The country rejected them. Overwhelmingly. Mr. Obama won the presidency by the largest margin since 1984.

I point all of this out because of the collective amnesia that has plagued all conservatives. Everything (including the failures in Iraq) are now being blamed on Obama. This intellectual dishonesty is all over the media and the blogs, but will not be present here.