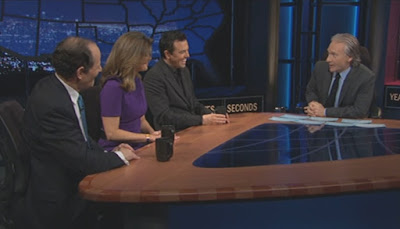 Great episode of Real Time last night. Maher was in good form, and to my surprise, he did not spend a lot of time criticizing President Obama. He was critical, as were most of the guests, but not too severely.

The consensus (which I agree with wholeheartedly) was really that Obama is being way too timid in his dealing with the Republicans. He seems to want them to like him, when he should be making them fear him. Guest Seth Macfarlane (creator of Family Guy) made a point that Maher himself made last year...that we need Obama's brains and Bush's balls. Bush was able to ram wildly unpopular legislation right through both houses of Congress. He had no resistance from Republican leadership, and the GOP members all did what they were told. Obama has none of that. He wants to reach a middle ground with the other side on every issue. And there is zero consequence to crossing him. It is so frustrating. He was elected to enact the agenda of the Democratic Party as it was stated in the campaign, and not to weaken every initiative by inserting the inferior ideas of the party that the country had rejected. Not sure why he doesn't see it that way. 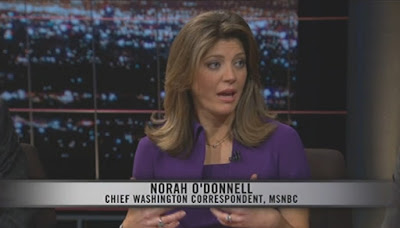 Besides Macfarlane, the other guests on the panel were former New York Governor, Eliot Spitzer, and my girl, MSNBC's Norah O'Donnell. Norah looked amazing, and like a good reporter, she remained pretty neutral on political matters. She did acknowledge the obvious - that no matter what Obama presents to Congress, the Republicans will vote "NO." The party has made the political calculation that allowing Obama to pass anything - no matter how small - cannot be allowed to happen. They are basically hoping the health care system stays the same, the economy does not improve, and that there is zero reform in the banking industry, so they can run on that in the midterm elections. Betting on bad times...damn is that cynical.

Comedian Wanda Sykes joined the panel toward the end, though I don't really remember much of what she had to say. It was funny, I remember that.

The show is essentially the same as it has been for the last few years, but there has been one improvement. The post-show, online segment called "Overtime" can now be viewed full screen and in high quality. Kudos to HBO.com for making the improvement.
Posted by Dave Splash

Yeah, it's still a great show. It will be interesting to see what Maher thinks of the ongoing game of chicken between the GOP and the Tea Party folks.