BANED? I Met Someone Actually Dumber Than Sarah Palin!! 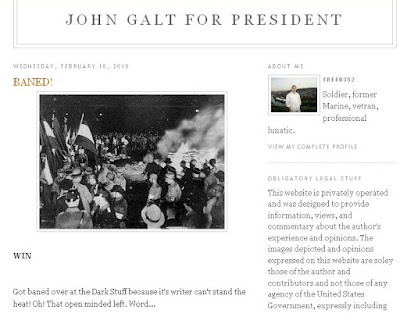 Can someone tell me what this d-bag means? I don't understand what "Baning" someone is. Apparently, I've done it to this guy. I tried looking it up, and according to the Miriam-Webster online dictionary, it is an obsolete term that means, "to kill especially with poison."

I don't remember killing anyone with poison. And though the owner of the blog called John Galt For President (someone actually likes Ayn Rand books?) claims he was "baned," I most certainly did not poison him. Whether or not he deserves it is open for debate.

I have a tough time understanding teh stupid, but I think the guy is referring to comment moderation which I have initiated today. Odd that someone with such limited intellect would assume that everything revolves around him and his limited brainpower.

The reason for the moderation, if you must know, is that I have been getting inundated with spam, computer-bot messages on tons of posts. I changed my settings a few months ago to require word verification in order to post. That stopped the problem for a little while. But it is back. With moderation, not a single comment can appear until I say so. No more spam.

The little baby known as free0352 - a loathsome, petty, little man who believes that one lone Congressman single-handedly started, and then fucked up, the Iraq War and spells at the 2nd grade level - can choose to believe whatever he wants, but I know the truth. Comment moderation is in place on nearly every blog in existence including the ones he steals all of his ideas from like World Net Daily, Michelle Malkin, Red State, Little Green Footballs, etc. Funny how when my comments are not published at Michelle Malkin's site, I don't turn into a crying little infant who casts aspersions without knowing any of the facts (FYI "aspersions" means : a false or misleading charge meant to harm someone's reputation. I know using big words are one of those liberal, elite qualities that you real Americans hate so much).

So...to recap: no one was "baned." Nice try.
Posted by Dave Splash

I am impressed with your ability to utilize elaborate circumlocutions, Splash.

I hope that doesn't make me a leftist though.

I don't think so. Personally, I think the only rational way to deal with free0352 (if one has to) is to do it this way. Why he is waging some silly one man jihad against me is beyond me. But, what goes on in the mind of a sociopath is not something I will spend a lot of time worrying about.

I think it is more the fact that you are both very passionate in your views and that those views are diametrically opposed.

Admittedly, Free's views reflect mine about 95% of the time, especially in comparison to yours.

However, it is by debating with people with which I disagree that I typically learn the most.

If you surround yourself with those that constantly echo what you say and tell you what you like to hear you become arrogant, and intellectually lazy, and more error prone. (i.e. Lord Obama) :)