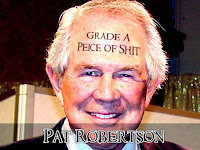 Yep. It took less than 24 hours for the good Rev. Pat Robertson to blame the people of Haiti for the devastating earth quake that hit the country yesterday and has killed as many as 500,000 people. On his program, The 700 Club, the vile hatemonger (who won the GOP Iowa caucus in '88, btw) Robertson said that Haiti was a "cursed" country after making a "pact with the devil." Somehow, Robertson thinks there actually is such a pact; and for that matter, that there is a devil. "Something happened a long time ago in Haiti, and people might not want to talk about it. They were under the heal of the French. You know, Napoleon the third, or whatever. And they got together and swore a pact to the devil. They said, we will serve you if you will get us free from the French. True story. And so, the devil said, okay it's a deal."
So, according to Pat Robertson (who considers himself a man of God), the people of Haiti deserve what has happened to them. Stay classy, religious right!
Posted by Dave Splash

So when Pat dies does that mean he did something to piss off God?

I think if God actually gave a shit about the likes of Pat Robertson, he would have killed him off many years ago.

Robertson is a fool. Well over 96% of Haiti is Christian. He does a diservice to himself and other Christians with this nonsense.