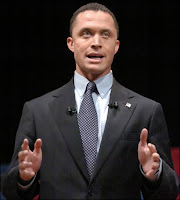 I met former Rep. Harold Ford, Jr. (D-TN) more than a decade ago in the Memphis airport, and came away from the meeting thinking that I just met the first African-American president. I even told him that someday I would be working on his presidential campaign.

I knew of him from his television appearances on CNN and the like, and he seemed like a knowledgeable, thoroughly likable and charismatic, smart politician. I watched him as he moved through the ranks of Democratic leadership. I was gobsmacked when he challenged Nancy Pelosi in 2003 for Minority Leader (he got creamed), but respected his boldness.

After serving a few terms in the House, Ford ran for the Senate in Tennessee. His 2006 campaign represented everything wrong with Democrats in the 2000s. He tried to shield any liberal positions by either denying he held them, or by watering them down so much they were indistinguishable from the Republicans. He ran against marriage equality, and as anti-choice. After Ford was slimed by the GOP with racist television ads, he refused to attack back. Instead, he went all "guns and God" on everyone and started running ads talking about how much his "faith" would guide him, if elected. Yuck. Bottom line is that he was behaving like a DINO. He was Republican lite. He lost.

Ever since then, Ford has been the kind of Democrat that Fox News viewers love...one that will publicly attack Dems and criticize them for not being more like Republicans. In 2008, he was a frequent guest during MSNBC's campaign coverage, and continued to offer the same recycled conventional wisdom that said Barack Obama could not win because he didn't connect with "regular people," and that being against the Iraq War was a political loser for the party. Ford, like most pundits, had it all wrong. He now claims to have been an Obama supporter all along.

Mr. Ford is now considering a run for the Senate in his adopted state of New York. He would be challenging conserva-Dem Kirsten Gillibrand for the Democratic nomination for a full term in Hillary Clinton's former seat. In an interview with the New York Times, Ford said that he had only been to all five boroughs of NYC via helicopter, and seemed thoroughly clueless on New York state issues.

He also espoused the same center-right nonsense that caused him to lose in 2006, only this time, he is doing it in a thoroughly blue state. What bothers me about Ford now is that he is so willing to shit on the Democratic party agenda so long as he views it as helping his own ambitions. He can learn state issues (Hillary Clinton did), and he can visit every county, but trying to be to the right of Kirsten Gillibrand to win a Democratic Party nomination is just plain stupid. And YOU KNOW that Ford will be given tons of time on Fox News to bash her, thereby allowing the right to prop up what will ultimately end up as his losing campaign. So-called Democratic infighting is Fox's bread and butter.

Harold, it won't work. You didn't win four years ago in a state where people knew you. You won't win here, either.
Posted by Dave Splash