Palin Is No Longer Unemployed - She Works at Fox 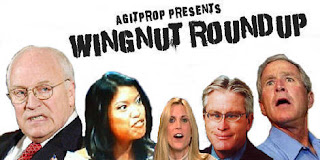 Add Sarah Palin to the list of wingnuts that call Fox News their home away from home. The channel dedicated to advancing the agenda of the Republican Party is set to announce that former Alaska Governor and current Facebook poster, Sarah Palin, has been hired on as a "contributor."

According to the New York Times, Palin will not have her own show, but will, on occasion, host her own series. Beyond that, she will be free to lie, distort, attack, make shit up, and self righteously criticize anyone not a Republican or an evangelical. Sounds like a match made in heaven.

And maybe now the media will stop obsessing over every single utterance this woman makes. Her twitter rantings are not news, MSM.
Posted by Dave Splash

If I were to accept your silly and false premise that Fox is a GOP shill, that would still make it only one network against a dozen for the Democrats and statists in this country.

Can't wait to see the Democrats' heads explode when Palin becomes president in 2012! :)

To quote Bill Hader pretending to be James Carville, "You're like a fat lady in a milkshake store...you're grasping for straws."

Even Fox News admits it is a right wing channel. Senior VP of programming Bill Shine at Fox News told NPR last April that Fox News is the "voice of opposition" to the Obama Administration. Not sure that is the role of a legitimate news organization, and hardly fair and balanced.

That same VP just told the LA Times yesterday, that they hired Palin because she is "polarizing," and that is what they want from their network.

If the thought of Sarah Palin (who didn't know North and South Korea were separate countries, nor why it was so, AFTER being selected as VP) as President doesn't scare the hell out of you, TP, then there really are two Americas: one that thinks, and the other is Palin's.

Your hypocrisy is showing, Splash.

What was MSNBC (and all of the other network news channels for that matter) if not the voice of opposition during the Bush administration.

Keith Olberman may be more polarizing than even Obama is!

For that matter what about our current president and his comment about our 57 states.

"But Obama is an intellectual!", crys the left. Yeah, so was Carter and look what a disaster that was. Luckily the American people rewarded his lack on foresight and leadership with only one term. Something that I strongly suspect (and pray) will be repeated with President Obama.

You, sir, keep confusing the news coverage from opinion shows. At Fox, there is no difference, so the confusion on your part is understandable. But considering that prior to the introduction of Fox News, journalism had decades old standards and practices regarding objectivity (ones that Rupert Murdoch's own family said are non existent at Fox), a fair look at the "media" would say that Fox violates those standards and practices on a minute-by-minute basis. And they barely pretend otherwise.

The liberal media myth has been shown for what it is...a right wing talking point invented by the Nixon administration. There is zero factual basis for the myth. The NY Times and Wash Post were Bush's biggest cheerleaders prior to the debacle in Iraq.

But, I am afraid for you, Paine. You are actually saying stupid people make better presidents? Wow. The conservative movement really is dead.

The NY Times and Washington Post were Bush's biggest cheerleaders?!?! Son, you must be reading a different edition than the ones I did. Either that or you live in a parallel universe where everything is the polar opposite.