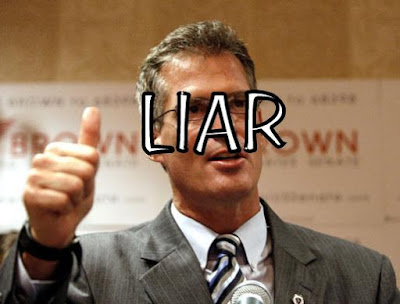 (from TPM) Massachusetts Republican Senatorial candidate Scott Brown has been caught lying. Yesterday, on the campaign trail, Brown said he was not familiar with the tea party movement, nor was he a part of it. The problem? There are pictures of Brown, on his own website, addressing a tea party crowd last April. Okay, maybe he forgot all about that rally. It was last April, after all. But then, last week, Brown was the guest of honor at an official tea party "Breakfast with Brown."