Life and Times, New Waiting Room, and My Radio Show - Yep It's a Weekend ReCap 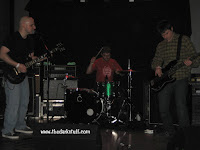 Not the most exciting weekend to report on, yet there were some highlights, to be sure. I started off on Thursday night by checking out the new and improved Waiting Room. I was only able to stay for a brief period, but that was enough to see the major improvements done to the club. I am very much looking forward to seeing a show there, as there is no longer any obstructed view; and with the ceiling of the entire club at the same level, the sound should fill the room even more so than it already did. The next show I am hitting there will be the It's True show on Sat. Feb 6.

I stayed in on Friday night due to total exhaustion, but hit The Slowdown on Saturday for the Life and Times show. I missed the first opener, but caught the entire set from Techlepathy. They are a decent band. If you are fan of early 90s Dischord Records stuff (like Jawbox, for example) or maybe Drive Like Jehu, you will like this band. 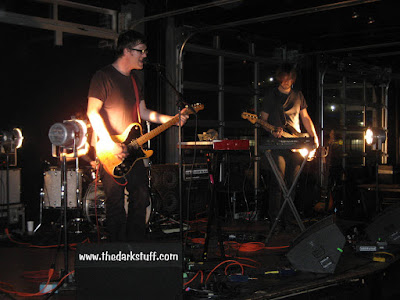 As good as Techlepathy was, they were no match for the mighty Life and Times. I cannot say enough good things about this band! Unfortunately, few in Omaha share my enthusiasm for them, as only about 40 people or so showed up. Their loss, I guess.

This was either my third or fourth time seeing The Life and Times, and they get better each time. While the show was mighty loud, it didn't seem quite as punishing as the last time. Good for me and my ears. The set featured a lot of material from the band's newest album, Tragic Boogie. I'll be honest, at first I didn't dig the new record. But after numerous listenings, I have fully come around. In fact, it was my #12 album of 2009 for my radio show.

Spent Sunday working on last night's show. Later on, I braved the snow and ice to actually get to the studio to do the show. That was fun. Nothing like risking your life to get to job that doesn't pay! After the treacherous drive home, I was so wound up that it took hours to fall asleep. I am currently running on about 3-4 hours of sleep. I expect a crash sometime in the two o'clock hour...
Posted by Dave Splash