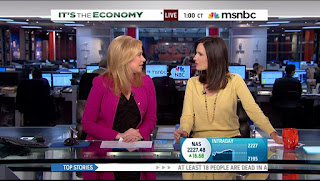 Republican Senator Judd Gregg of New Hampshire practically threw a tantrum on air today when he was asked a simple follow up question by CNBC's Melissa Frances. Frances appears on MSNBC weekly along with Contessa Brewer for an hour solely focused on the economy. On today's segment, the guest was Sen. Gregg, who was asked to give his thoughts on ways to increase jobs and improve the economy. Rather than answer with any specifics, he offered up very simplistic and generic Republican talking points about "reducing the size of government" and "cutting spending."
Okay. But when Frances told the Senator that what he was saying was "good in theory" but wondered what specifically he would cut, Gregg attacked her personally and called her "duplicitous" and "irresponsible." When Contessa Brewer tried to diffuse the situation by suggesting that the Senator was not being challenged, just being asked for specifics, he erupted at her, too. When asked if federal education spending should be cut, Gregg then when after her integrity, "And what a dishonest statement to make. On its face you’re being fundamentally dishonest when you make that type of statement."

So asking an elected official what specifically should be trimmed from the federal budget is being "fundamentally dishonest?" What an arrogant prick. Here is the video of the exchange:

First of all Senator Gregg, those generics you like to speak in might work in a softball format like Fox News, but follow-up questions are sort of par for the course from actual reporters/anchors. Secondly, Melissa Frances is, without a doubt, a conservative. She is from CNBC, and is generally quite critical of President Obama. Gregg was way out of line, and was attacking someone who more than likely agreed with him. Lastly, Senator Gregg, don't mess with Contessa Brewer! That is thoroughly unacceptable in my book.
Posted by Dave Splash

I agree that Gregg acted like an idiot with how he treated the anchors and was way out of line.

He did, however, give some sepecifics (with which I agree by the way) of where to cut spending such as the remaining TARP funds, the remaining stimulus funds, government freeze on discretionary spending and cutting back on entitlement spending.


Now I would like him to be specific on which entitlements, but he wasn't anywhere as generic as you implied he was, Splash. Frankly he was more specific than Obama was through most of his speech of generalities last night.

I guess you and I have different definitions of specific. I heard nothing but blah blah blah cut spending blah blah government bad blah blah deficit blah blah. Same shit I always hear from the GOP.

From what I understand the TARP program is practically over, and much of the money has been re-paid (with interest), so that is a meaningless example on Gregg's part. Same with the stimulus money frankly. It was authorized nearly a year ago, and no Congress - Republican or Democrat - ever recalls money after it is sent out. Besides, despite right wing dogma to the contrary, the stimulus has been a tremendous success. Freezing spending in a recession or early stages of a recovery is bad economics. Period.

But the point of the post was just how obnoxious Gregg was to Contessa Brewer. And I am intolerant of people messing with Contessa.

Once again, you are wrong on the economics, but you are correct about Gregg's boorish behavior.

We'll agree to disagree on that, I guess. But I can't believe that Obama wanted Gregg to be in his cabinet!? Luckily, Gregg backed out. We dodged a bullet on that one.