'Extract' Is Definitely Worth a Rental 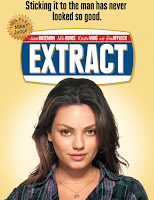 I watched the movie Extract last night. Though it is not Mike Judge's best movie (that would be Office Space), it was still quite good. The film is not really "laugh out loud" funny, though there is some comedy gold there. In the same way that Office Space was designed to show the humor in the mundane, office cubical existence, Extract does the same for the factory worker existence. Having never worked in a factory myself, I can't say if it truly captures the experience the way Office Space did. Knowing how vividly Mike Judge captures things in his films and shows, I imagine it does.

Aside from being a Judge fan, I rented this movie because I love Jason Bateman. The guy is comic genius. He is one of the best "straight men" in comedy today. Personally, I thought he would have made a great late night talk show host, and would have done a better job than Jimmy Fallon has done. But, that ship has sailed, and Bateman now has a very successful movie career. But if any late night hosts retire, I think he would be a natural.

Truth be told, the main reason I liked Extract was Mila Kunis. The trailers made it seem like she had a bigger role than she did, but whenever she was on screen, I was fixated. Sure, I'd seen her in numerous things before (That 70s Show especially), but I don't think I ever really "noticed" her until now. DAYOM! That woman is beautiful. And funny. She plays something of a shady character in the flick who manipulates men into doing things for her. She becomes the crush object for Jason Bateman's character, and that actually leads to the funniest part of the movie. 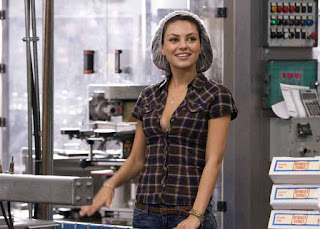 Kunis takes a temp job working at Bateman's factory, and he instantly becomes attracted to her. She is flirty and nice, and pretends to be interested in him. She has ulterior motives, though. Somehow, Bateman (married to Kristen Wiig in the film) feels that it would only be acceptable to act on his crush if his wife was unfaithful first. Then, he would have some type of moral clearance to cheat as well. Bateman's best friend - played by Ben Affleck - has an idea. He knows a gigolo who comes into the bar where he works, and so he suggests they "hire" him to try and seduce his wife. If she goes for it, then Bateman is in the clear, and can pursue his crush guilt free. If she doesn't go for it, he will know that he can't either. The entire situation with the gigolo and Kristen Wiig is easily the comedic highlight of the movie.

Give this one a rental if you want a light, fun 90 minute comedy. It won't make you wet your pants from laughing too hard, but it is a solid film. Mike Judge gets yet another thumbs up from yours truly.
Posted by Dave Splash