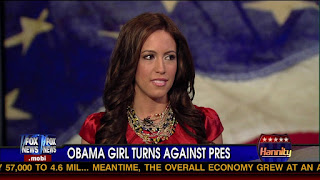 Fox News star Sean Hannity just might be the least petty person on TV. You know this because last night he continued his "substantive" and thoroughly "intellectually honest" critiques of President Obama by bringing on bikini model and internet sensation Amber Lee Ettinger (aka Obama Girl). Apparently, she's not as big on Obama as she was during the video she made in 2007 which was written and sung by someone else. Oh well, I guess no actual Democrats were available to come on Hannity's show. But, in Fox News world, she counts.

Whatever. She's still hot as hell. Even if she is a total airhead. 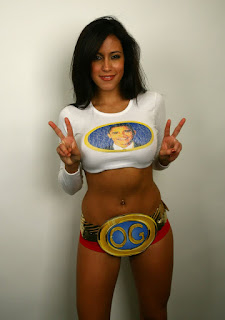 They might as well call it the Bimbo News Network. Every time I turn it on, Hannity or O'Reilly are talking to some former weathergirl and asking them their opinions on current affairs.

I love the eye candy, but there are pretty women in journalism who have brains. They just aren't very welcome at Fox.

I think the fact that this gal was once "The Obama Girl" confirms that she was indeed an airhead.

Looks like she is starting to grow up and learn though, just like the rest of America, by and large.

I don't know. That Fox News alternate reality Kool-aid lowers IQ with every sip. Sounds like she's had quite a bit.

Either that or she's looked at ther ceck stub lately. If she's lucky enough to get one...