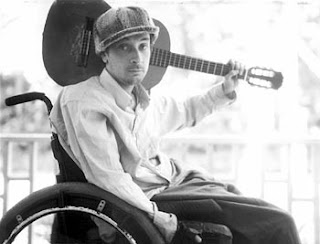 While I was away on my trip for the funeral of my grandmother, I heard the bad news that one of my favorite musical artists, Vic Chesnutt, had died. He committed suicide on Christmas Eve (NYT obituary here). Mr. Chesnutt's life was rather tragic, and his songs were often extremely difficult to listen to. His pained and emotional lyrics are among the best of the rock era. He could paint such a vivid picture that one could practically see the places he was describing without actually being there.

Over the last few years, Vic's career had not been going very well. I saw him 3 or 4 years ago when he was touring in support of the re-release of some of his earlier albums. Attendance was sparse, to put it mildly. Most recently, I saw him open for Jonathan Richman in 2008.

Going back and listening to Vic Chesnutt's music, it seems like his suicide was almost a foregone conclusion. Take the lyrics to his 1992 song, "Florida" for example: "A man must make unpopular decisions from time to time / And a man can only stand what a man can stand / It's a wobbly volatile line / Florida, Florida, the water table is fucked / Florida, Florida, there's no more perfect place to give it all up / A man must take his life in his own hands / Hit those nails on the head / And I respect a man who goes where he wants to be / Even if he wants to be dead"

Vic's friend, Kristin Hersh, has set up a website where you can donate money to his family to help defray their expenses.
Posted by Dave Splash

That's too bad. He was a well admired songwriter.