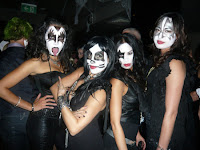 Just got back from a trip to Florida. I guess I picked a great time to leave as Omaha got nearly a foot of snow, and temps dropped below zero. So, I missed the cold, and I missed the KISS concert. They played at the Mid America Center last Friday. Honestly, even if I had been in town, I probably would have skipped it. Since they fired Ace and Peter, they are little more than a tribute band - like female KISS (pictured above).

Beyond that, things have been a little slow. I completed my list of the Top 50 albums of 2009. On my radio show last Sunday night, I played cuts from 50-26 (see the list here), and I will do the top 25 this coming Sunday. Make sure to tune in from 9-11 pm central to the stream at 897theriver.com. For an abbreviated version of the list, make sure to check my next two podcasts, as Keith and I are each going to present our top 5 of the year. 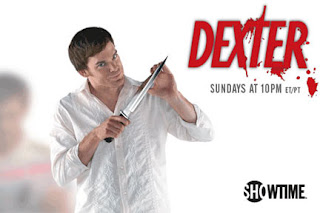 Moving on...now that the fourth season has ended, I think it's about time that everyone acknowledge that Dexter is the best drama on television. Bar. None. I'm still freaking out about the season finale the other night. Don't worry, no spoilers here. I know of at least two people who read this blog who are not caught up yet, so I don't want to be the one who ruins it for them. But I don't think it is giving much away by saying that the show has been altered in a major way by the finale. I was shocked, and it was thoroughly unexpected. Truth is, Dexter is not a show that generally ends each season with a cliffhanger. It is usually wrapped up at the end of each season. Not this time, my friends. I wish season 5 started tomorrow. I don't think I can wait nine months.

And while we're acknowledging bests on television, I think Showtime has surpassed HBO for best original programming on cable. Besides Dexter, Showtime's Californication had an exceptional season this year. I almost wrote the show off after a mediocre second season, but I am very glad I didn't. If I had I would have missed out entirely on all of the nudity from Eva Amurri. Her brainy college student character who works as a stripper on the side made this a must see season. Despite the fact that the stripping college student is a myth along the lines of the unicorn, when Eva Amurri does it, I can suspend disbelief. She's my new favorite young actress. I hope she comes back next season. 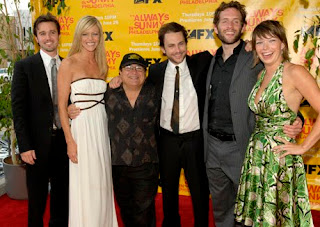 Those who know me on a personal level know that my sense of humor tends to straddle the line between high and low brow. 30 Rock is a good mix of both, and that is probably why it is one of my favorites. But sometimes, I just want something stupid to laugh at. In the past, I went with Trailer Park Boys. Unfortunately, that show has ended. Fortunately, I have found something to replace it...It's Always Sunny in Philadelphia. Damn, I love this show. I bet I've watched the new Sunny Xmas DVD 4 or 5 times already. It is definitely low brow, but if you don't laugh out loud while watching this show, then I don't think you have a sense of humor. Nothing is sacred on Sunny, and no one is spared from being made fun of. Every week I change my mind on who my favorite character is. It usually winds up being Charlie, but every once in a while, Mac makes it to the top of the heap. Can someone tell me why this show's seasons are so freakin' short?!

No good shows this week, but next week is HUGE! Talk soon, bitches!
Posted by Dave Splash