Fascinating...But I'm Not Sure I Believe It 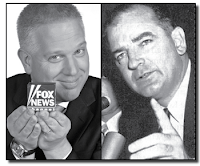 From Talking Points Memo: A USA Today/Gallup poll finds that President Barack Obama is the country's most admired man, and Secretary of State Hillary Clinton is the most admired woman.

Among Republicans, Obama came in second to George W. Bush, but still beat out Glenn Beck in the poll.

The poll asked "What man that you have heard or read about, living today in any part of the world, do you admire most?" In response, 30% gave Obama as their answer, dominating Bush, who was the second-highest most common response, with 4%.

When the same question was asked about women, Hillary Clinton barely edged out Sarah Palin 16%-15%, with Oprah Winfrey taking third place at 8%.

Palin, Bush, Glenn Beck and Condoleeza Rice were the only conservatives who ranked in the poll.

Among Republicans, Bush only beat Obama 11%-7%, and Obama is still more admired than Beck, who received 3% of the GOP vote.
Posted by Dave Splash

I'll be curious to see the results of this poll a year from now. I suspect it only goes further down hill for Obama from here.

Doubtful. If you remove Rasmussen from polling data (and the Rasmussen poll has skewed far to the right for many years), Obama's approval rating is above 50%, and his numbers have gone up since the failed Christmas attacks. Regardless of how the 2010 elections go, Obama will be re-elected in 2012, and will likely be considered a great president by historians and non-biased observers. He didn't want to spend the first year of his presidency cleaning up after the last administration, but when you follow the worst president ever, that is what he had to do.

LMAO. I think we should just agree to disagree on this one, sir. :)

Oh, that could indeed happen if Obama gets re-elected. I understand that Kim Jong Il requires every home to have a picture of him posted in a prominent place too though.

It CERTAINLY won't be due to an adoring public wanting him on Mt. Rushmore. Even support amongst his base is collapsing now. Obama would actually have to accomplish something to warrant that honor.

I hope you guys on the right continue to be so dismissive of President Obama. It's why he won the most decisive victory since Reagan's re-election, and why he will win again in 2012. While you guys fight between an unemployed Facebook user, a bunch of insane teabaggers, and Mitt Romney (who evangelics will not vote for due to their prejudice against Mormons), we'll clean up.

And the talk about the "base" abandoning Obama is a line dreamed up by Karl Rove. The latest poll shows him above 85% approval among Dems. That hardly seems like abandonment. The media will continue to keep trotting out right wing talking points and masquerading them as news, while Obama keeps winning elections.

Have fun the next seven years.