Conservatives To Everyone Else: Attacks on Your Children Are Fair Game 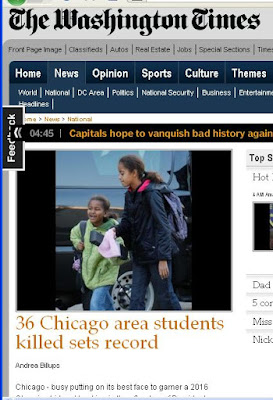 This was on the front of yesterday's Washington Times, the conservative paper of record. Is anyone else disgusted by the imagery they purposely used? Seriously, why can't the right ever just debate issues without having to delve into personal attacks and death threats (or threatening someone's kids).

After much well deserved criticism, the paper's editor, right wing hack John Solomon, offered this pathetic and disingenuous pseudo-apology, "The theme engine, through automation, grabbed a photo it thought was relevant, and attached it to the story" Solomon says, acknowledging that the photo had gone up without a person seeing it. "There was no editorial decision to run it. As soon as it was brought to our attention, we pulled it down."

Yeah, right. Liar. A major newspaper is going to run a front page story utilizing a photo of the daughters of the President of the United States, and no one saw it before it went online? Bullshit.
Posted by Dave Splash

Now if only you, and the rest of your fellow left-wing political travellers would show that same outrage for past, and I assure you what will be future transgressions, against right-wing politicians' kids then I will be impressed.

I also agree with the incredulity and the outrage. You were going along pretty well there Paine, until the second paragraph.

What are the past transgressions against right-wingers' kids? Are we talking about reports of the Bush girls' partying, Dick Cheney's daughter's sexuality, or stuff about the Palin kids? This isn't just rightwingers being "persecuted". From the other side, how about the reporting on Al Gore Jr. and his partying ways, and all the cruel jokes about Chelsea Clinton when she was a teenager? These kids are all subject to such treatment due to the high public profile of their parents. Privacy becomes lost.

What transgressions will occur in the future? Are we planning on Sarah Palin becoming president so she can put her kids under even more of a media microscope than they were under in 2008? Seriously, God forbid she should ever become president, for her kids' sake if not for the sake of the nation... but I think her kids have probably been messed up enough already from being used as campaign props. I don't know how much the Obama's children are being messed up from similar things, and from being First Children, but I can't imagine it would be too healthy for any kid.

If a parent puts his or her political career ahead of the health and well-being of their children, I tend to not like such people as parents very much. And when the media does something like what Dave brought up here, it definitely gets me rankled.

Most of what we are going to see in the mainstream media is junk stuff like Balloon Boy, the errors of Tiger Woods' ways, and the White House "party crashers".
They aren't a "liberal media", they are a corporate media that shows and tells us what they think will sell. In today's society, if news outlets told us about what was going on in Congress, people would get bored and would tune out, and the media outlets would go broke (you can argue that outfits like FOX and MSNBC talk about what is going on in Congress, but they spend most of their time criticizing people).

So it won't matter about the party affiliation of the parents of the kids who will get attacked or ridiculed in the press... the public has been dumbed down enough that it loves anything that even slightly reeks of sensationalism, and they seem to be suckers for stuff about kids, especially if it's negative.

Sorry about the misanthropic rant, but I often wonder if there is any hope for "news" in our country's future.

I have to agree with Snave. What transgressions are you talking about, TP?