I've decided to get a jump on the long, holiday weekend with a long, holiday live music post. Though the Thanksgiving weekend isn't the optimum time for concerts in Omaha, there are a surprising amount of quality shows coming up. The weekend starts Wednesday night with Saddle Creek recording artists, Beep Beep. The Omaha boys are winding down their career as a band (their final show is set to take place in late December) with a slew of shows over the next few weeks. Wednesday's show is at The Slowdown, and will be opened by Agent Ribbons and Thunder Power. Tickets are $7 at the door. 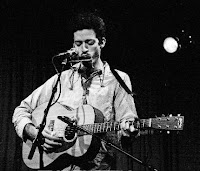 Skipping turkey day, we move on to Friday's AA Bondy show. As far as this artist goes, up until recently, I was completely ignorant. During an unrelated conversation, it was revealed to me that Mr. Bondy was once Scott Bondy, front man for Alabama rockers, Verbena. Damn, I had no idea! I used to really like Verbena. They were like a southern Replacements, in a way. Not sure if Bondy's solo material is along the same lines, but based on his past output, it is definitely worth taking a chance to find out. Opening the show are Lissie and Phil Schaffart. Tickets are $8 in advance or $10 at the door.

There wasn't much to my liking on schedule for Saturday night, but Sunday had something good. Kansas City hard rockers, Season To Risk, are playing at The Waiting Room. For years, I had been under the impression that Season To Risk had broken up. Turns out, I was right. But, the band is reforming for select dates to celebrate the 20th anniversary of their founding, and Sunday's show is one such date. If memory serves, STR was a great live band back in the day. It should be interesting to see how they have held up over the years. Opening are Techlepathy & Comme Reel. Tickets are $8 at the door.

Of course, on Sunday night you also have the option of listening to New Day Rising (streaming at 897theriver.com from 9-11 pm central), but that is what I recommend every Sunday.
Posted by Dave Splash