I'd love to tell you about all of the great and productive things I did over the long, holiday weekend, but that would be a lie. I barely moved from the couch, in all candor. Well, that is an exaggeration. I got off the couch plenty, but what I did once off the couch is hardly worthy of a blog post. But let's test that theory, shall we?

Last Wednesday, I hit Dundee Cork and Bottle to partake in some friends' annual tradition of getting completely sloshed on wine the night before Thanksgiving. Hell, with every bottle in the store 50% off, it's hard not to over indulge. I wish I could tell you about all of the great wine I had, but I can't really remember any of the names. It was that kind of night...

Turkey Day itself was pretty mellow. I did a little work around the house, but mostly watched a few episodes of Fringe from season one. I still can't decide how I feel about this show. Obviously, I like it enough to keep watching it, but I feel like once I complete this season, I won't be continuing on. It's produced by the same team as Lost, yet it comes across as an extremely unrealistic new take on X Files. Anna Torv is supposed to be the Scully in this show, but there is no Mulder. The cases are even more unbelievable, and Joshua Jackson just ticks me off every time I see him. Why do I keep watching? Your guess is as good as mine. 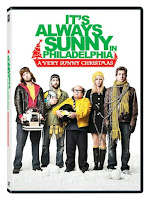 Later on that night, some friends and I watched the new Christmas DVD from It's Always Sunny in Philadelphia. Damn, is that thing strange! You won't see the Christmas season the same way after watching this video. Maybe that was the point.

I intended to see A.A. Bondy at Slowdown on Friday night, but got sidetracked by some friends in from out of town. Ending up staying at Jake's on the other side of town for the entire night. The rum was not going down too well that night, unfortunately, and I ended up feeling kinda sick for much of the next morning.

The rest of the weekend was largely consumed with preparing two radio shows. In addition to doing this week's show, I had to do one for the 13th of December as I will be out of town. I will be starting my Top 50 albums of 2009 show that night, which meant that I had to actually make my Top 50 list. Wanna know what I picked? Well, then tune in to the show on the 13th! (streams Sundays 9-11 pm central at 897theriver.com)

Speaking of New Day Rising, I was a little off during last night's show. Just before going on air, I was recording the show for the 13th. When I started my live show, I kept finding myself making reference to things I had just recorded. Stuff no one will hear for two weeks. I must have sounded like a blithering idiot at times. Maybe no one noticed.
Posted by Dave Splash