Hard to believe it has been over 15 years since the death of Kurt Cobain. I remember the day vividly. I lived in Seattle at the time, and was planning on moving out of the state of Washington. There had been rumors floating for the previous week or two about Cobain, but they were just rumors. So, when the checkout girl at the grocery store asked if I'd heard about Cobain's death, I was quite dismissive, and laughed it off. I took my groceries home, turned on CNN, and there was Kurt's picture. It was true. He had died. I knew at that moment that my decision to leave Seattle was the right one. It was the end of an era.
Now, all of these years later, one of the most infamous Nirvana concerts of all time has been released on CD and DVD. Live at Reading documents Nirvana's headlining set at the 1992 Reading Festival in the UK. The show took place at the height of the Kurt + Courtney tabloid mania, and Cobain was quite angry at the media then. The rumors about Cobain's drug habit and the possible break up of Nirvana were swirling around then, too. I've seen snippets from this concert, but now the entire thing is available for purchase. I picked up the CD/DVD set, though they are also available separately. 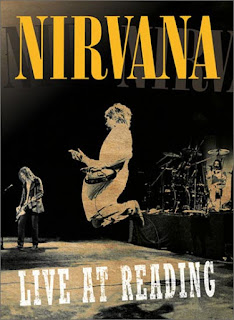 Email ThisBlogThis!Share to TwitterShare to FacebookShare to Pinterest
Labels: Nirvana