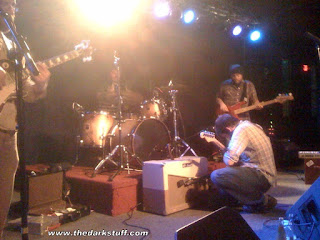 Earlier in the decade Omaha was on the cutting edge of independent music and the city produced some internationally recognized artists like Bright Eyes, Cursive, and The Faint. While those artists are still going strong, many outside of the Omaha scene have been wondering if the city would be delivering any other artists of that quality, and with that possibility for commercial success. So far, there have been some top quality artists, but none have had the national or international impact that the original three have had.

Currently there are a number of great bands making a name for themselves in Omaha. One band in particular is beginning to make waves with the local music establishment and its taste makers. That band is called It's True. I have now seen the band twice (including last Saturday night at Waiting Room) and can report that, in this case, you should believe the hype. 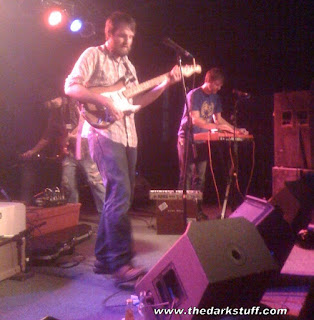 I am almost completely at a loss as to how to describe the band's sound or who I would compare them to. It's True mixes the best elements of noisy shoegaze rock with more quiet singer/songwriter type material. Guitarist/vocalist Adam Hawkins has a high, sweet voice which contrasts nicely with the louder parts of their songs; yet it can also stand virtually alone when the band quiets down to near silence and Hawkins sings almost a capella. The rest of the band members are all excellent musicians especially lead guitarist, Andrew Bailie.

Though I probably wasn't supposed to hear it yet, I was able to hear a couple of tunes from the band's forthcoming full length album. What I heard was very impressive -- much better than almost any comparable new band. The performance and production were first rate, and some label (if they still exist) would be wise to snatch this band up.

Right now, for me, the local scene is best represented by Little Brazil and It's True. I wish there was some way to share some of that great studio music I heard, but there isn't. For now, you'll have to make due with some older recordings and some live ones on It's True's Myspace page. Check it out, and if you can think of who they sound like, please drop me a line or leave a comment. It has been driving me crazy for weeks!

I love this band. Adam's (and It's True's) music has changed so much over the past couple of years. What started out as one guy with an acoustic guitar has evolved into something completely different and amazing.

I wrote a post about It's True a while back. You can check it here, if you're interested:

I guess it's more of a personal reflection than anything else.

Your blog comes up as "protected" Megan, what you trying to hide haha?

I've also written about them. I didn't mean to write a personal reflection, but after meeting/interviewing them, it was hard not to. They were warm, funny, personable...and talented. It was great being in their practice space, I enjoyed immensely.

Here's my article with an interview and video of It's True practicing.