Battlestar Galactica: The Plan? Save Your Money! 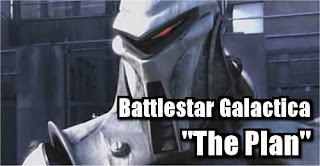 There was a whole helluva lot to like about the 21st century Battlestar Galactica. It was a vast improvement over the campy 1970s TV show, and it delved into a number of very relevant and current social issues (i.e. WMD, torture, abortion, civil rights, racism). While I could definitely quibble with the series ending, overall, it was an excellent series that ranks among my favorites of all time. The same cannot be said for the recent BSG related movie, Battlestar Galactica: The Plan.

The film is billed as a re-telling of the BSG story from the perspective of the cyclons as opposed to that of the human survivors of the genocide which reduced humanity to a mere 50,000 or so people. Why this was deemed necessary is certainly worth pondering, but why this was done so poorly (and with so much old footage) is the real question.

The Plan begins a few days before the destruction of Caprica and the rest of the planets that humans live on. The story focuses heavily on Cylon #1 (Brother Cavil), as he seems to be the only one aware of what all twelve cylon models look like. Throughout the course of the movie, we see Cavil in a number of situations that will look familiar to those who have seen the series. The reason for this is simple...they are using old footage. The new footage shot is then interspersed with the old and made to look as though it was happening at the same time. A few of the original actors did return to reprise their old roles (most notably Tricia Helfer as Cylon #6), but most did not.

In the end, we "discover" what we already knew by watching the show. Namely that the cylons were conflicted about destroying humanity, and many of them had become so entrenched in their individual lives and loves, that they openly questioned why they needed to continue to pursue the remaining humans. We also discover that the "final five" cylon models who were revealed in the last season had some small inkling that they might, in fact, be cylon prior to their "revealing" late in the series. This is especially true in the case of Samuel Anders.

Bottom line for me is that this DVD was an unnecessary purchase, and that it adds very little to the overall BSG series. It seems like this was a way to extract another $20 from fans of the show, and little else. If you are a serious fan of the series, wait and see if SyFy airs it for free. I wouldn't rush out to the video store.
Posted by Dave Splash

Rented, not bought, so it was only a couple bucks lost (and hours) but I agree...

Damn! And I just pushed this to the top of my Netflix list.

Sort of reminds me of the hash that Paramount made of their attempt on 'Enterprise' to address the Romulan back story.

It's worth a rental, I suppose. I went and bought it and wish I hadn't.