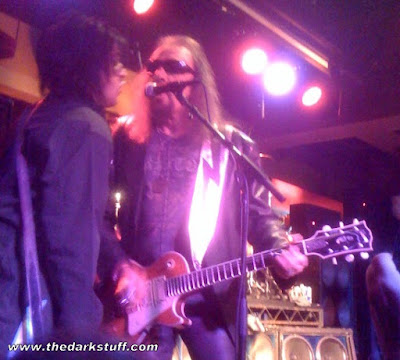 Former KISS guitarist Ace Frehley kicked of the world tour in support of his newest album, Anomaly, last night at Whiskey Roadhouse in Council Bluffs, Iowa. Naturally, I was there front and (almost) center. Thankfully, I missed most of the openers. I did catch the last few songs from the second band - doing a Pantera cover - and was very glad that I arrived when I did.

After a brief wait, Ace and his band (the same band he was with two years ago) hit the stage and opened the set with the KISS classic "Shout It Out Loud." Ace traded off verses with the drummer, but strangely, it seemed like the drummer knew the lyrics better than Mr. Frehley, who seemed to struggle with them. Ace similarly struggled with lyrics to some of his own songs as well, most notably on "Speeding Back to My Baby" from 1978 KISS solo album. 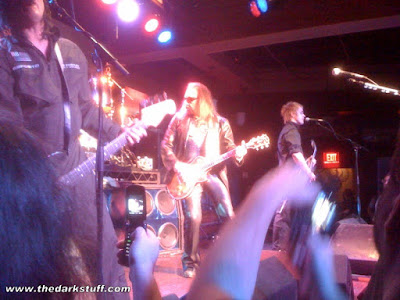 Despite flubbing the occasional lyric, Ace seemed in good form and good spirits. There were some technical issues at the beginning of the show, and Ace nearly tripped and fell into the crowd during "New York Groove," but opening nights on tour are usually filled with such things.

As far as song selection went, I was surprised that Ace chose to go with some KISS songs that he didn't write ("Love Gun" and "Love Her All I Can") as opposed to ones he did like "Talk To Me" or "Hard Times" or even any of the Frehley's Comet period stuff (87-89). Ace's new record was covered pretty well, as was his 78 solo album, of course.

I probably enjoyed the show two years ago slightly more than I did last night's show; but that may have been due to it being the first time I had seen him in a club. This time, I knew what to expect.

I would assume that as the tour progresses, Ace and band will work out some of the kinks in the show and play around a little more with the song selection. I would still recommend going to the see him if he plays in your town, especially if you are a KISS fan. It's not often that one is able to see a legend like Ace Frehley in a small club setting.

Also of Note: Set those DVRs for The Tonight Show with Conan tonight to see Pixies perform "Here Comes Your Man." And Saturday night marks the return of Arizona's psychedelic punkers, Meat Puppets. In all my years of seeing bands, I have never seen Meat Puppets in concert, so I am looking forward to tomorrow's show. Opening the show are local boys Little Brazil and Atlanta's Winston Audio. Tickets are $13.
Posted by Dave Splash

Ace was always my favorite member of KISS. I dressed up like him (well, at least the face)for Halloween one year and "New York Groove" is the only cut I really liked much on the group's individual solo records.