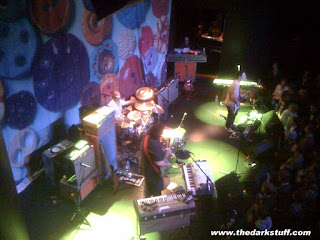 Despite being kinda sick, I made it out to last Friday's Yo La Tengo show at Slowdown, as predicted. I got there as the opener was finishing its set, which worked for me. There was a decent crowd, but the show was definitely not sold out. (Note: how sad is it that on the same night Owl City sold out at a different venue. WTF?) Being sick, I opted out of drinking, and stuck with a regimen of diet Coke for the whole night. 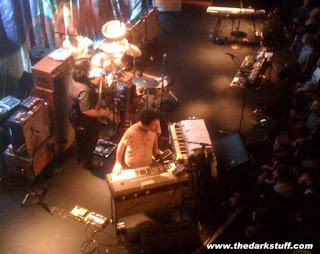 I made my way on up to my usual balcony spot just as YLT was taking the stage. The band opened with a very rocking version of "Here To Fall" from the Popular Songs album, and it seemed that the band was intending to really deliver a loud, feedback drenched rocker of a set. Things did not exactly go like that. For those not familiar with Yo La Tengo, the band's music can veer wildly between loud, fuzzed out, droning rockers and very quiet, ambient, ballads. Friday's set leaned a little bit more in the quiet, ambient direction.

Though I really enjoyed the show, I do wish the band had "rocked out" a little more. While I do appreciate the quiet stuff at home, when I'm at a club with 500 of my closest friends, I want the rockers. Besides tunes from the new album, YLT went back a ways into their deep catalog, and played a lot from 1997's I Can Hear the Heart Beating As One. Their version of The Beach Boys, "Little Honda" was a show highlight.

To wrap up my brief review, I will say that Friday's show was not my favorite Yo La Tengo show (I've seen them 6-7 times), but it was still really good. There is no way I will ever miss YLT if they are in my town. They are one of the most consistently excellent bands I've ever seen, and even if they are a bit too mellow at times, I will always support them.
Posted by Dave Splash