Why Is Liz Cheney Afraid of a Real Debate? 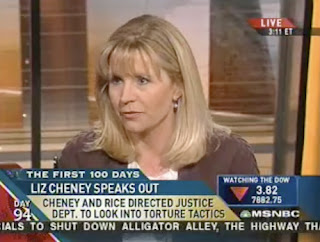 Liz Cheney's new wingnut front group, Keeping America Safe, is running ads claiming both the Obama Administration and the "mainstream media" refuse to debate national security with them. The ads single out MSNBC and claim that the network refuses to "talk substance" and asked "What are they so afraid of?" (Please note the picture above is from a Liz Cheney appearance on MSNBC)

Well, it is interesting that Ms. Cheney is making this particular claim against MSNBC, and using the faces of two of its most prominent hosts, Keith Olbermann and Rachel Maddow, to make its point. It is interesting because it is Liz Cheney herself who has refused to appear on the network to "talk substance" with Olbermann, Maddow, or Chris Matthews. She has appeared on the network's Morning Joe program which is hosted by friendly Republicans Joe Scarborough and Mika Brzezinski. Miraculously, Ms. Cheney has found the time to appear on pretty much every show on Fox News (including numerous appearances on the extremely friendly Hannity), yet doesn't have enough time to make even one appearance with Rachel Maddow? Liz, what are you so afraid of?

Last night, Rachel Maddow called out Liz Cheney on her bullshit claim that MSNBC refuses to "talk substance" with her and her neo-con, Cheney legacy enhancement front group. She re-iterated that it is Cheney who refuses to appear with anyone other than a friendly host, and announced that Liz Cheney has pretty much an open invitation to appear on her show. Olbermann and Matthews have made similar statements.

It would appear that lying is in the Cheney family DNA. Liz scheduled another appearance on Hannity for tonight, and has not agreed to appear with Rachel Maddow.
Posted by Dave Splash