What the F&*K Is Wrong With South Carolina? 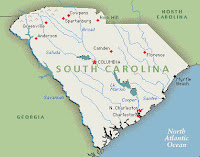 First we had the Republican governor, Mark Sanford, and his "trips to the Appalachian Trail" (nudge nudge wink wink). Then we had Sen. Jim DeMint argue that defeating health care was good because it would "destroy" President Obama, and it would be "his waterloo." After those incidents, we had Congressman Joe "You Lie" Wilson violate House rules (and general classiness standards) by heckling the President during a joint session of Congress. Now, we have two Republican Party chairmen from the state praising Sen. Demint for watching over the nations pennies like a Jew would. Yeah...they really said it. To make a point about "fiscal responsibility," the two referred to an offensive Jewish stereotype. Again I ask, what the fuck is wrong with South Carolina?

In a guest editorial for South Carolina paper, The Times and Democrat, chairmen Edwin O. Merwin Jr. and James S. Ulmer Jr. wrote the following commentary that relies heavily on an anti-Semitic stereotype: "There is a saying that the Jews who are wealthy got that way not by watching dollars, but instead by taking care of the pennies and the dollars taking care of themselves. By not using earmarks to fund projects for South Carolina and instead using actual bills, DeMint is watching our nation’s pennies and trying to preserve our country’s wealth and our economy’s viability to give all an opportunity to succeed."

So far, neither man has offered an apology. Considering the state, and the attitude of the current conservative movement, I'm sure they will argue that it is the critics of this article who need to apologize. In their down is up, black is white bizarro world, that probably makes sense. If the South Carolina GOP were smart, they would get out in front of this with an apology ASAP.
Posted by Dave Splash

Yes, while the concepts are correct, they absolutely MUST apologize for the anti-Semetic remarks.

Paine - Not sure what concepts you are referring to, but at least we agree that the comments were inappropriate. As of this point, no apology has been offered.

Well, now they have apologized according to a report at Talking Points Memo (http://tpmlivewire.talkingpointsmemo.com/2009/10/demint-wealthy-jews-op-ed-about-me-was-thoughtless-and-hurtful.php?ref=fpblg)

Still does not excuse their comments; however, Pelosi and Reid should take note since they never seem to think an apology is in order from them despite some pretty horrible comments over the years from the both of them.