Proof That Fox Is Just a GOP Front Organization 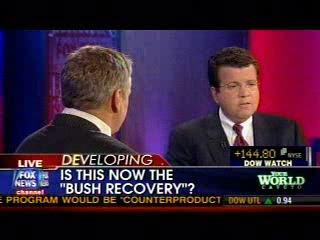 This was what Fox News was displaying and talking about on Neil Cavuto's show today -- the "Bush Recovery." Really?! What the fuck did Bush do? He practically destroyed the US economy, started two wars that cost billions while cutting taxes for the rich, and began the series of bailouts that everyone, including Fox, has been criticizing.

Fox has been attacking President Obama since his inauguration on his economic programs, and blamed him for the stock market losing 40% of its value (which mostly happened before Obama took office). Now, nine months later, after Obama has initiated his policies, passed the economic stimulus, and is on the verge of passing health care, the stock market hits the 10,000 mark. How in the hell does that have anything to do with Bush? And how can the same people who have been arguing that Obama will destory the economy now pretend his policies have had no effect on the market's recovery? Make up your fucking mind, people!
Posted by Dave Splash

Man, that is amazing.

I agree absolutely with your assement of Bush, but you are wrong in your assessment of Obama.

With the debt and deficit that Obama has amassed for us, the bottom is sure to drop out and likely end our country as we know it. Of course, the left will blame all of that only on Bush too.

Well, only fair since it was Bush's fault. But you know, you righties have some memory issues. Ronald Reagan blamed Carter for the economic problems the country was dealing with until 1983. When the GOP lost the Senate in 82, they still blamed Carter. So, if Reagan could blame his predecessor for three years, why all the whining about Obama blaming his for a mere 10 months?

For your FOX-based amusement!