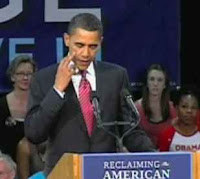 (from The Onion) WASHINGTON—Claiming that the president was preying on the public's fear of contracting a fatal disease last week when he declared the H1N1 virus a national emergency, Republican leaders announced Wednesday that they were officially endorsing the swine flu.

"Thousands of Americans—hardworking ordinary Americans like you and me—already have H1N1," Republican National Committee chairman Michael Steele said during a press conference. "Now Obama wants to take that away from us. Ask yourself: Do you want the federal government making these kinds of health care decisions for you and your family?"

Other prominent Republicans opposing Obama's declaration of emergency include Louisiana governor Bobby Jindal, who urged residents of his state to continue not washing their hands, and radio host Rush Limbaugh, who made a point of dying of the virus during his show on Wednesday.
--------------------------------

Sad thing is that this not very far removed from the truth. No matter what Obama is for, the right is automatically opposed. I bet Obama could make Rush Limbaugh say Mom & apple pie are socialism.
Posted by Dave Splash

You're absolutely right. Today I heard Laura Ingraham harping on the fact Obama's jokes weren't funny enough at a fundraiser.

Perhaps there is a way for Obama to use this to his advantage. Maybe he should come out in favor of eliminating the estate tax, reducing capital gains taxes, & making millionaires tax free. Then, when the right reflexively opposes it, we won't have to deal with the idiocy of trickle down economics any more.

Good news there about Rush, Dave! Thanks for sharing that. I am very glad he finally decided to make that worthy sacrifice for the good of the country.

I find it fascinating that ALL the "Don't get the vaccine!!!" e-mails I get are from my Libertarian/Conservative friends who loathe Obama.

I asked one of them if he wanted to make a bet with me. I wanted to bet him a hundred dollars that a year from now, if we looked at numbers, there will be more Americans dead from H1N1 than there will be from the vaccine. He wouldn't go there.

They really must think H1N1 is some kind of left-wing plot. Just as there were numerous lefties who thought (and some who still think) "9-11" was something concocted by the Bush administration, I fully anticipate guys like Lou Dobbs and Rush Limbaugh to start hinting on their programs that the "swine flu is something Obama developed as a way to control the populace through fear" or some such foolish thing.

I haven't been looking to see what the conspiracy theories are about h1N1, but I'm sure there will be a bunch if there aren't already. No matter that more than a thousand Americans have died from H1N1 already...

The Onion is RIGHT ON with this one.