Note to GOP: Jackie Robinson Was NOT a Republican 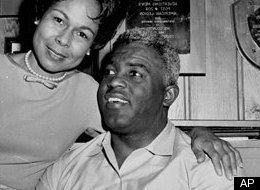 The Republican Party has been trying to show that its membership includes more than just white southerners. RNC Chairman Michael Steele (himself not a white southerner) has just launched a new website, and under it's "Republican Heroes" section it lists a hero that was not exactly a loyal Republican, Jackie Robinson.

Robinson broke baseball's color barrier as the first African-American to play in the Major Leagues. But despite supporting a Republican governor in New York, he was most definitely not a conservative. Here are some quotes from his autobiography:

As the Republican party moved to the right and toward Barry Goldwater in 1964, Robinson was shocked and said he had "a better understanding of how it must have felt to be a Jew in Hitler's Germany."

"Every chance I got, while I was campaigning, I said plainly what I thought of the right-wing Republicans and the harm they were doing. I felt the GOP was a minority party in term of numbers of registered voters and could not win unless they updated their social philosophy and sponsored candidates and principles to attract the young, the black, and the independent voter. I said this often from public, and frequently Republican, platforms. By and large Republicans had ignored blacks and sometimes handpicked a few servile leaders in the black community to be their token "niggers." How would I sound trying to go all out to sell Republicans to black people? They're not buying. They know better."

"I wasn't altogether caught of guard by the victory of the reactionary forces in the Republican party, but I was appalled by the tactics they used to stifle their liberal opposition. I was a special delegate to the convention through an arrangement made by the Rockefeller office. That convention was one of the most unforgettable and frightening experiences of my life. The hatred I saw was unique to me because it was hatred directed against a white man. It embodied a revulsion for all he stood for, including his enlightened attitude toward black people."

I see our favorite Dependable Renegade (Watertiger) has a post on this. Seems the rethugs don't know how the innertubes work and accidentally posted their administrative names and passwords.

Yes, because the Democrats have elevated so many blacks out of poverty in the last fifty years. Look at all of the cities that are hugely minority in population that have liberal mayors. They are some of the poorest and worst managed in the nation.

Not to mention, some of the biggest racists in congress are Democrats. (I give you Robert KKK Bird as example number one.)

Right, it's liberals who are racists, Paine. That's why blacks vote more than 90% Democrat. Is that because they are stupid? Incapable of making their own decisions?

It's a fact that conservatives opposed the Civil Rights movement in the 1960s. An indisputable fact. Ignore party for a second (I know that's hard for die hard Republicans, even those who deny they are Republicans). Southern conservatives, who had been Democrats abandoned the party and went to the GOP over civil rights. The Republicans who did support it, were the more liberal ones from the northeast. Facts are facts.

It wasn't the Democratic party that adopted a "Southern Strategy" to rile up angry whites over ending their centuries old social order (i.e. segregation).

Paine, your attitude toward this subject is a big part of the reason minorities don't take the GOP and conservatives seriously. It's a complete denial of the past. Conservatives would go a long way toward getting minority voters if they accepted responsibility for their past actions and their opposition to civil rights, and made an honest outreach to minorities. Instead, all we hear from the right is how Barack Obama hates white people, or Michelle Obama said "whitey" or that there is no such thing as police profiling of minorities, or that any black person in a position of importance is an "affirmative action case." That is all stuff said by prominent right wingers in 2009. You guys need to clean up your own act, call out the racists on your own side (Limbaugh, Rep. Joe Wilson, Rep. Lynn Westmoreland, to name just 3) before calling out the other side. The proof is in the votes. Even if Obama were not the nominee in 2008, the minority vote would have been the same. They see conservatives and the GOP as hostile to them, and I can't say I disagree.

As for Byrd, his past is indefensible. But he has apologized for it, and African-Americans in his state vote overwhelmingly for his re-election every six years. Compare that to Limbaugh who says the NFL these days looks like the Bloods & Crips, then denies his statement is racist, and refuses to apologize. Or Rep. Westmoreland who said the Obamas were "uppity," then denied there was a racial component to his comment. Really? A conservative from rural Georgia didn't think calling a black family uppity was racist? Puh-lease.

Neither side is perfect, but the right has a lot more work to do on this issue than the left does, that's for sure.