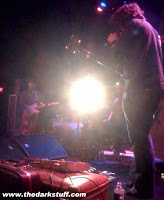 Another great Dinosaur Jr. show last night. It was probably the 4th or 5th time I had seen Dinosaur Jr. over the years, and despite knowing just how loud the band is, I still neglected to bring earplugs. My bad. It is a lesson I should have learned long ago. Oh well, who needs hearing, right?

I missed the first opener, Violent Soho, but I heard they were good. Apparently, they are signed to Thurston Moore's Ecstatic Peace label. I haven't heard all of the bands on the label, but I do really like Awesome Color, Be Your Own Pet, and Jemina Pearl, so I have reason to assume I may like this band. They were giving away free CDs, but I haven't checked out mine yet.

Next up was a solo set from Dino's bassist, Lou Barlow. He played along with the Missing Men, who were the guys who backed up Mike Watt on his last tour. Though I have Lou's new album, Goodnight Unknown, I am not super familiar with the tunes yet. It seemed that most of the 35 minute set was comprised of songs from that album. It was really cool, but I didn't recognize most of it. I was kind of hoping Lou would throw in a Sebadoh song or two, but that didn't happen. 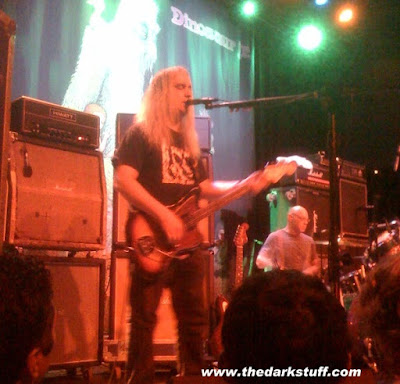 Like I mentioned earlier, I should have brought earplugs for the Dinosaur set. Right as the band walked on stage, Lou Barlow started handing out some to people in the front. I have never seen a band hand out earplugs before, but that should have been a sign to anyone (like me) in the room to take cover.

The band played amazingly well, and the set featured a great mix of the old and the new. Dino classics like "Freak Scene," "The Wagon" and "Feel the Pain" were intermixed with songs from the band's two most recent records, Beyond and Farm. J. Mascis was in top form. Despite being a fan of his for going on 20 years, I am still blown away every time I hear the man play guitar. He is a true master of the instrument. 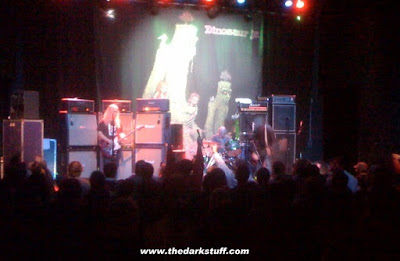 The crowd was a little light (maybe 300 people total), but it was a Tuesday night after all. With J. Mascis, it's sort of hard to tell what his mood is like, so who knows if he cared. Lou made a few comments about how quiet the room got between songs, but that was the only acknowledgment from the band about the crowd (plus Lou kind of made fun of a kid who kept yelling for "Start Choppin'" which he said the band did not know how to play).

I loved the show, and don't really mind the pain I am in today (in terms of deafness and tiredness). Dinosaur Jr. is one of those bands that I will never miss if they're in my town.
Posted by Dave Splash

Indeed a great show, but Slowdown crowds are increasingly the pits.

I mean for fuck's sake would it kill anybody to actually show some enthusiasm for a band that brings the rock? Aside from a few old-timers and kids throwing horns, the rest of the crowd stood like statues.

Sad, and it makes me yearn for the days of mosh pits. They were for meatheads, but at least people moved.

I'm not a huge Slowdown fan personally. Nice room, but lame atmosphere. I would have loved to see the show at Waiting Room. It's hard to imagine that kind of volume in a place that size.