Californication Is Back in a Big Way 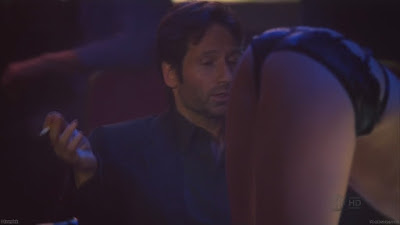 As the title of this post states, Showtime's series Californication is beginning its third season with a bang. I really liked this show in its first season, but the second was really lame. Hank's (David Duchovny) attempt at a normal, domestic life made for a boring season. I'm glad the writers have changed it up.

For season three, Hank has stumbled into a teaching gig at a small university. So far, he is not exactly the professorial type. He told a young writing student (Ed Westwick) that he was a terrible writer, and that he should study something else. The student attempted suicide later that evening. He has also been caught smoking pot in his office. But, what would Californication be without the sex? And that is where Eva Amurri comes in. 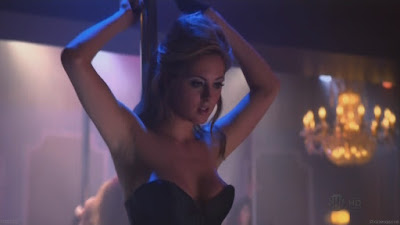 Amurri is the daughter of Susan Sarandon, and she plays another student in Hank's class (Jackie). In addition, she is the roommate of the student who tried to kill himself after Hank's brutal evaluation. While visiting the recovering student, Hank agrees to take Jackie to work, not realizing that she works as a stripper.

There is a lot more to the story, but after seeing Eva Amurri in action, I may have a new favorite actress! She already had a lot going for her genetically. Susan Sarandon is quite attractive, obviously. But Susan Sarandon never danced naked on television, so Eva has her there. Other guest stars this season are Kathleen Turner, Peter Gallagher, and Diane Farr (formerly of the great show numb3rs).
Posted by Dave Splash