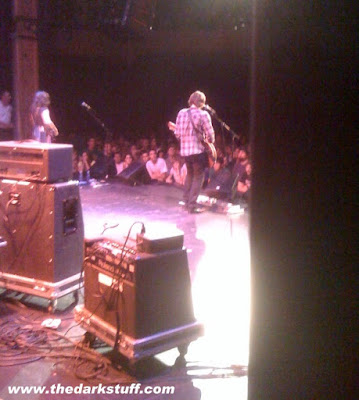 Silversun Pickups Des Moines, IA 9/19/09
As predicted, I had quite the hectic weekend. I did end up skipping the Silversun Pickups' Omaha show, and caught them instead in Des Moines, IA (about two hours away). The venue there, the Hoyt Sherman something or other, is really nice. It is an old mansion that has been converted into a 1200 seat theater. I spent the entire day with the production folks, and caught most of the show from the side of the stage (as you can see in the above photo). Silversun was excellent, as was opener Manchester Orchestra. The first opener, Cage The Elephant, had a ton of technical issues during their set, but it didn't seem to keep them down. They had an energetic show, but I wasn't really feeling the music. 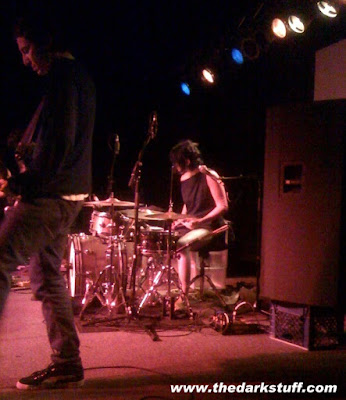 Eugene and Carla of Autolux 9/20/09 @ Waiting Room, Omaha
After sleeping in really late, I spent most of Sunday gearing up for the Autolux show (and watching episodes of The Wire which I have just now discovered, but that's for another post). I pre-taped my radio show so I would be certain to catch all of Autolux's set. But the band wasn't scheduled to go on until 11, so I was able to listen to some of it. Weird hearing myself on the radio. ANYWAY...I rolled into The Waiting Room around 10 and caught Capgun Coup. I've always had mixed feelings about that band, and last night they were pretty bad. It almost seemed like that was their intent. 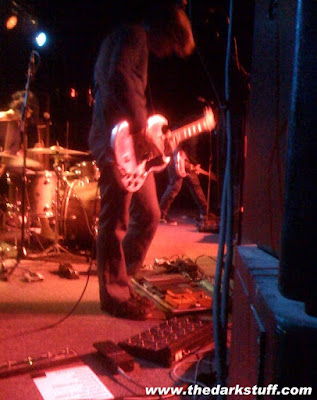 Greg Edwards of Autolux 9/20/09 @ Waiting Room, Omaha
As for Autolux, they were better than I had remembered. And louder. I think I lost a bit of hearing just getting close enough to the stage to snap these pics! The set was comprised of about half songs from the old album, and half from the forthcoming album (still no word on when that will be released). The new stuff sounded fantastic. Besides being blown away by the angular guitar stylings of Greg Edwards (who I've liked since his tenure in Failure), I was really impressed with drummer Carla Azar. She also sings some of the quieter songs, which seemed to always come at just the right time. The set was paced very well. Truth be told, the voices of bassist/vocalist Eugene Goreshter and those of Azar are pretty similar (Eugene has a high voice), so it really doesn't matter who is singing.

I just wish this band would get their shit together and get that new CD out. Waiting five years between albums for a relatively unknown band could be career suicide. Autolux is so amazing, I'd hate to see their career ended before it really had a chance to start.
Posted by Dave Splash

Autolux were amazing! I really hope they come to Omaha again after the new album is out (Carla said January)