This Is What Passes for Journalism at the Omaha World Herald 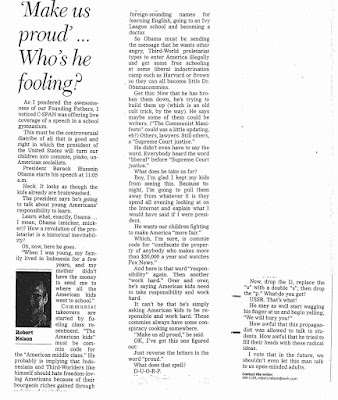 This "column" was printed in the September 9, 2009 edition of the Omaha World Herald. Unfortunately, the paper does not post the local columnists on its website. The piece (of something) was written by a guy named Robert Nelson ((robert.nelson@owh.com). This is what passes for political discourse in Omaha these days. I wrote him a letter to let him know what I thought of his...work. (NOTE: There are a few lines that got cut off at the bottom of the 1st column. They are: "unfettered capitalism. Oh, oh, oh. Now he's celebrating some girl with one of those...")

Are f&*king kidding me? What the hell was that so-called column (‘Make Us Proud’…Who’s he fooling?) you wrote in yesterday’s paper? The president of the United States is a “commie” a “pinko”? Your editor claims it was satire, though I question whether you two understand the concept (by the way, when I addressed you as the idiot who wrote that column, the OWH desk knew it was you to whom I was referring). Your right wing diatribe (incorrectly labeled as news, though it is clearly the opinion of someone who watches a little too much Glenn Beck and views Sarah Palin as an intellectual heavyweight), spread more hate and misinformation in a single column than World Net Daily, Pat Buchanan, Fox News, and Rush Limbaugh have done in the eight months since President Obama took office.

You owe the city of Omaha and the American public (minus the ones who carry assault weapons to town hall meetings) a huge apology.

This will not end nicely if you don’t back off this wingnut hate speech. Being a Republican is hardly a crime, sir, but attempting to pass off the rantings of people who view “The Turner Diaries” as American history, is a disgrace to your employer and more broadly to your profession.

I’m sure the column went over well with the militia and black helicopter crowd, but do yourself a favor and distance yourself from that garbage.

Have a nice day.

To this guy's credit, he wrote me back. He made it clear that this column is his attempt at satire. It does not reflect his personal views, and he is just as sick of the right wing hit machine as I apparently am.

Regardless, I still think it was a bad column. Reminds me of the "New Yorker" cover from last year that was attempting to satirize all of the bogus, right wing, mostly racist, rumors about candidate Barack Obama. To the non-racist, the cover was abhorrent; while to the racist, it confirmed and re-enforced how they already felt about Mr. Obama. Under heavy criticism, the cartoonist said it was satire; and that was, no doubt, his intent. But it sure didn't look that way.

Well, in that case, Jon Stewart ended up defending the cartoonist and mocking the outrage. I'm not really certain that, in this case, my outrage over this column deserves mocking. But, I'm over it. In my defense, the column did not appear on an editorial page, it was on the front of the "Midlands" section. It had no disclaimer or anything, either, and I don't know what this writer's other columns are like.

On its own, it seemed just like a Glenn Beck radio broadcast. Sadly, that is not satire.

The editor of the paper told an associate of mine that they had received numerous calls about the column. Many saluted the writer and the OWH for finally telling the "truth" about Obama. See, that's why this kind of thing can be dangerous.