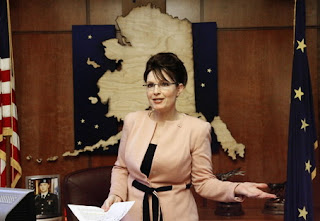 In her first trip to the region, the former Alaska governor addressed an annual conference of investors in Hong Kong in what was billed as a wide-ranging talk about governance, economics and U.S. and Asian affairs.

Two US delegates left early, according to AFP, with one saying "it was awful, we couldn't stand it any longer." He declined to be identified.

"I'm going to call it like I see it and I will share with you candidly a view right from Main Street, Main Street U.S.A.," Palin told a room full of asset managers and other finance professionals, according to a video of part of the speech obtained by The Associated Press. "And how perhaps my view of Main Street ... how that affects you and your business."

She also praised the conservative economic policies of former U.S. President Ronald Reagan and former British Prime Minister Margaret Thatcher, according to another attendee who declined to be named because he didn't want to be seen as speaking on behalf of his company.

She claimed that if taxes were cut and the capital gains tax and estate tax eliminated, the world would "watch the U.S. economy roar back to life."

She didn't refer to President Barack Obama by name, the Wall Street Journal reported, but said she called his campaign promises "nebulous, utopian sounding... Now 10 months later, though, a lot of Americans are asking: more government? Is that the change we want?"

Some attendees were disappointed by her focus on her home state and her attacks on President Obama.

"As fund managers we want to hear about the United States as a whole, not just about Alaska," one told AFP. "And she criticized Obama a lot but offered no solutions."

Palin also said she believes the U.S. has a role in helping China find its future and that the U.S. will always be on the side of promoting freedom, according to Palmer.

In an apparent reference to tensions between Muslim Uighurs and Han Chinese that have led to riots, Palin mentioned China's ethnic problems, arguing they are "a sign that China lacks mechanisms to deal with regional issues," Palmer said.

The speech marked Palin's first major appearance since she resigned as governor in July, and the speech's location and international scope could help boost her credentials ahead of a possible bid for president in 2012. While she's thought to be considering that, her Hong Kong trip bore no political overtones, said Fred Malek, a friend and Palin adviser.

"You can read a lot of things into it, 'Is she trying to burnish her foreign policy credentials?' and the like. But really, it's a trip that will be beneficial to her knowledge base and will defray some legal and other bills that she has," Malek said.

Palin aides refused to disclose her fee for the appearance, which has been rumored to be in the low six figures.

"We're curious as to what she's willing to say in private but not in public," Sevugan said. "Are there other countries that she can see from her window that she doesn't want us to know about?"
------------------------------------------
I'd summarize her speech as "same shit, different venue." If the Republican Party actually considers Palin a serious candidate for President, than the GOP is in even sadder shape than I thought. What happened to conservative intellect? When did the right wing become little more than talking point reciting robots?
Posted by Dave Splash

I don't know if I would vote for her yet, but she definitely strikes me as the anti-Obama.

I would view you as detached from sanity if you'd even consider her for president. Look, she does push my buttons with her nasty rhetoric and her divisiveness. She is George W Bush in a dress: ignorant and arrogant at the same time - and proud of it.

Honestly, I don't think the country could survive four years with her in charge. We wouldn't have a single ally left, and we would be at war with 10 countries at the same time. The woman is clueless, and a huge part of why the Republicans lost in 2008. She represents Rove-ism at its worst.

Say what you will about Barack Obama, but you can't deny his intellect. He is definitely up to the job on that level. Sarah Palin couldn't even answer a question about what newspapers she reads! And you want her to be president?!

Puh-lease. If the right is going to make a comeback, you would be wise to look for someone with a little more intellectual heft.