The Republican War on Sanity 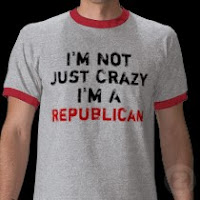 I have never in my life heard of such an un-American thing as the Florida Republican Party telling parents to keep their kids out of school because the President of the United States wants to speak to children about the importance of studying and getting good grades. Every previous president in the modern era has done a similar speech, and this was non-controversial. I mean, how is studying hard controversial? But now that the Republican party is controlled by craziest fringe of the batshit crazy fringe, anything done by President Obama is subjected to this idiocy, and is called "indoctrination."

I know liberals were very critical of President Bush, but that was based on his record after years in office. Obama has barely been in office for nine months, and the level of unhinged, baseless attacks from the right is unprecedented in US history. The right is now opposed to a speech that promotes individual responsibility. WTF?! Wasn't this the right's calling card for the last two decades? This is beyond a simple double standard for Democrats. This is a whole new right wing standard...the Obama standard. This states that no matter what comes out of President Obama's mouth at any given moment, it is to be treated as an assault on freedom, liberty, tradition, Christianity, and a socialist indoctrination.

Look, guys on the right, I know being in the minority sucks. I know that losing an election is hard to take. But seriously, grow the fuck up. Barack Obama is the duly elected President of the United States, and he won with the biggest electoral majority since Ronald Reagan's re-election in 1984. The people have spoken. Democracy does not mean that you always get your way. No one is taking away your freedoms simply because you lost an election.

Listening to the president is a positive thing for school children. The president should be a role model for kids, and parents should not shove their radical, fringe politics down the throats of their children until they are old enough to understand what it is they are hearing. Obama is telling kids to work hard in school. That is not indoctrination. Making your kids wear an Obama=Hitler t-shirt, and joining you while you bring a gun down to the town hall meeting with your member of Congress so you can scream obcenities at him or her, definitely is.

Now, for those of you with an IQ above 70, prepare for your head to explode. Here is the press release, in its entirety, from the head of the Florida Republican Party:

“As the father of four children, I am absolutely appalled that taxpayer dollars are being used to spread President Obama’s socialist ideology. The idea that school children across our nation will be forced to watch the President justify his plans for government-run health care, banks, and automobile companies, increasing taxes on those who create jobs, and racking up more debt than any other President, is not only infuriating, but goes against beliefs of the majority of Americans, while bypassing American parents through an invasive abuse of power.

“While I support educating our children to respect both the office of the American President and the value of community service, I do not support using our children as tools to spread liberal propaganda. The address scheduled for September 8, 2009, does not allow for healthy debate on the President’s agenda, but rather obligates the youngest children in our public school system to agree with our President’s initiatives or be ostracized by their teachers and classmates.

“Public schools can’t teach children to speak out in support of the sanctity of human life or traditional marriage. President Obama and the Democrats wouldn’t dream of allowing prayer in school. Christmas Parties are now Holiday Parties. But, the Democrats have no problem going against the majority of American people and usurping the rights of parents by sending Pied Piper Obama into the American classroom.

Good grief... will the limits of cognitive disconnect and inability to connect dots know no bounds? Talk about taking things to the extreme.

How is it that in inspirational message to the nation's youth cannot be apolitical? With such a deep hatred of the president, how soon will they be blaming things like bad weather and bad officiating at sporting events on the president? Heh...

This is like a pathological hatred of the Clintons but on steroids.

When the right wing in this country has the intellect of that free0352 guy, you know you enter into a "no sense" zone when dealing with them.

Like you said, it is a pathological hatred. It is not based on anything the president has actually said or done, it's based on what these wingnuts claim he will do. Based on what? Why expect reason from unreasonable fools.