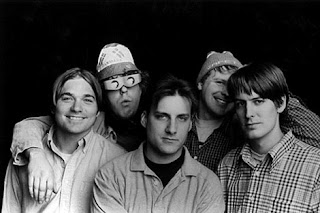 YES!!! YES!!! YES!!! That is about all I can say. According to the music blog Brooklyn Vegan, seminal 90s rock band Pavement is reuniting in 2010 for a few shows and possibly a tour. YES!!! "According to reliable sources, it's finally happening in 2010! There will be multiple, possibly four, nights of shows at NYC's Central Park Summerstage in September of that year. That could be part of a tour. That could be the end of a tour, the middle of a tour, or even the beginning of a tour, but it seems reasonable to speculate that they might make their official comeback at Coachella in April."

This is amazing news. In general, I am opposed to band reunions. The band is never the same as they used to be, and it is generally a disappointment. But recently, with the reunions of Dinosaur Jr., Mission of Burma, and The Lemonheads, I am re-thinking my previous position. Besides, it's only been 10 years since the break-up, and I saw Stephen Malkmus as recently as last year, and he was amazing. I don't see how this could go badly. If they only play in NYC or Coachella, I may have to fly over there.
------------------------------
UPDATE at 7:40 pm: Bob Nostanovich, former member of Pavement, is currently in Omaha at The Waiting Room (6212 Maple St). He just CONFIRMED the Pavement reunion story to one of the club's owners. He said it is one show, for sure, and possibly a tour afterward.
Posted by Dave Splash