No Racism on the Right? Have You Heard of Rush Limbaugh? 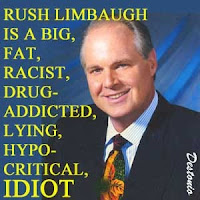 Yesterday, former President Jimmy Carter was interviewed by NBC's Brian Williams. Among other things, Mr. Carter expressed his belief that some of the extreme rhetoric and hostility being expressed toward President Obama is due to his being an African-American. He did not say all of it, or most of it, but he felt that the linking of Obama's policies to those of the Nazis is rooted in racism. "Those kind of things are not just casual outcomes of a sincere debate on whether we should have a national program on health care," he said. "It's deeper than that."
The right, naturally, denied that any racism is involved. None whatsoever. In fact, according to Glenn Beck, it is President Obama who is the racist. Putting that utterly ridiculous statement aside (which has cost Beck 50% of his sponsors), it is undeniable, considering our nation's history, that some of the opposition to the first black president is because he is...black. Let's face it, actual racists were not Obama supporters. If they voted at all, they definitely did not vote for Obama.

The outcry from the right misinterprets what Carter said. Carter never said all or most of the people who oppose Obama are racists. He was referring to the most vocal and extreme fringe. He based his conclusions on his personal experience growing up in the segregated South, and the nature of the opposition to Civil Rights in the 196os. If you agree, fine. If you don't, fine. Personally, I do see some similarities between the opposition to Civil Rights and Martin Luther King, and the opposition to Barack Obama and his policies (which were endorsed by the nation via an election). Hell, how many times did segregationists claim their opposition to MLK was because he was a "communist" and not because he was black. For the record, MLK was not a communist. Few racists actually call themselves racists, and many actually believe they are not. Still, it's hard to argue that the "birther" movement would have taken form with a white president, and those African witchdoctor posters being displayed at teabagger rallies are definitely racist.

Just to set the record straight, I do not believe that all or even most of those who oppose President Obama are racists. But if you deny that there is any racism at all in the opposition, then you lack credibility and don't live in the real world.

But those on the far right - especially Rush Limbaugh - continue to insist that there is no racism at all on the right. But Limbaugh himself has a long history with racism. NewsOne has compiled a list of the Top 10 racist quotes from Limbaugh:

1. I mean, let’s face it, we didn’t have slavery in this country for over 100 years because it was a bad thing. Quite the opposite: slavery built the South. I’m not saying we should bring it back; I’m just saying it had its merits. For one thing, the streets were safer after dark.

2. You know who deserves a posthumous Medal of Honor? James Earl Ray [the confessed assassin of Martin Luther King]. We miss you, James. Godspeed.

3. Have you ever noticed how all composite pictures of wanted criminals resemble Jesse Jackson?

4. Right. So you go into Darfur and you go into South Africa, you get rid of the white government there. You put sanctions on them. You stand behind Nelson Mandela — who was bankrolled by communists for a time, had the support of certain communist leaders. You go to Ethiopia. You do the same thing.

5. Look, let me put it to you this way: the NFL all too often looks like a game between the Bloods and the Crips without any weapons. There, I said it.

6. The NAACP should have riot rehearsal. They should get a liquor store and practice robberies.

7. They’re 12 percent of the population. Who the hell cares?

8. Take that bone out of your nose and call me back(to an African American female caller).

9. I think the media has been very desirous that a black quarterback do well. They’re interested in black coaches and black quarterbacks doing well. I think there’s a little hope invested in McNabb and he got a lot of credit for the performance of his team that he really didn’t deserve.

10. Limbaugh attacks on Obama. Limbaugh has called Obama a ‘halfrican American’ has said that Obama was not black but Arab because Kenya is an Arab region, even though Arabs are less than one percent of Kenya. Since mainstream America has become more accepting of African-Americans, Limbaugh has decided to play against its new racial fears, Arabs and Muslims. Despite the fact Obama graduated magna cum laude from Harvard Law school, Limbaugh has called him an ‘affirmative action candidate.’ Limbaugh even has repeatedly played a song on his radio show ‘Barack the Magic Negro’ using an antiquated Jim Crow era term for black a man who many Americans are supporting for president. Way to go Rush.
----------------------------------------
UPDATE: A reader at The Daily Dish wrote to Andrew Sullivan with these insightful comments:

If you can only show that a movement is significantly animated by racism by showing obvious kooks supporting it (white hoods, people holding Obama witch-doctor posters, whatever), then you will of course not find many of those. Welch is right that those people are genuinely unpopular.

What is far less unpopular is believing that lots of federal tax money went to black welfare queens in the 1980's (despite no such evidence) or that lots of federal tax money in today's democratic health care proposals would go to illegal immigrants (despite explicitly being precluded by law, and despite no evidence that enforcement would be a problem). Are these views not "animated by racism?"

You don't have to wear a white hood to have views that are significantly animated by racist beliefs and fears--and saying that a lot of the hysterical protest on the right (stylized as a desire for 'small government') is significantly animated by racist beliefs and fears is most decidedly not to say that "limited government sentiment is automatically a form of subliminated racism." Much of it is so animated, but that doesn't mean that each person with such 'limited government' views is a racist, let alone has a penchant for white-hood wearing.

Here's a question: what proportion of the people clamoring about 'limited government' at these rallies seem to have no problem with--indeed seem to much support--federal programs that they think benefit them and people like them (Medicare, Social Security, federal spending that provides jobs in their community, such as on defense, etc.), but are rabidly opposed to things that they think will go to people unlike them? I think an answer to that question would go a long way to answering how much of the protest is animated by racism.
Posted by Dave Splash