It Took Three Whole Days To Do This? 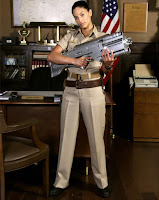 I was able to wrap up watching Season 2 of Eureka over the long weekend. Still totally digging the show. I was helped by the fact that SyFy (which is still a stupid name for a network, by the way) ran a Eureka marathon last Friday and Saturday. They played fan favorites, so there was no real order to them. Still, Eureka isn't necessarily a show that you need to see in sequence in order to enjoy. Having said that, a few Season 3 and 4 secrets were kinda ruined for me by seeing these episodes out of order, but this show is not Lost. I can deal. Besides, I have Season 3 on the way.

Besides watching a lot of Eureka and doing a thoroughly excellent radio show on Sunday night, my weekend was spent catching up on sleep. Oh, yeah, and watching Nebraska destroy Florida Atlantic Saturday night in the season opener. Did anyone else think that Florida Atlantic's coach looked like Colonel Sanders? My friends and I imagined he spoke like Foghorn Leghorn. I say, I say...that shit cracked me up.
Posted by Dave Splash