Experts: Pelosi Is Right To Worry About Violence 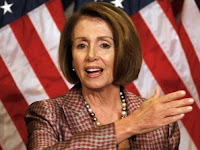 Very interesting article from Politico about the potential for political violence. In other words, Pelosi is right. Here are a few choice quotes:

"But it’s not just Pelosi who is worried. In interviews with POLITICO, five former Secret Service, FBI and CIA officers say that they, too, are concerned that today’s climate of supercharged political vitriol could lead to violence."

"All that contributes to a dangerous mix, says former Secret Service agent Ronald Williams, who served from 1970 to 1993. “When there are vitriolic comments, acrimonious commentary and anger, the likelihood of violence escalates,” he said.

Williams, who served on the protective detail for Ford, said he agreed with Pelosi’s comments, even though he doesn’t personally care for the speaker’s politics. “I’m not a real big fan of Nancy Pelosi’s,” he said. “But she is correct."
Posted by Dave Splash

You know since you righties constantly whine that all of your radical bullshit is always "taken out of context," it is shocking to me (not really) that you would intentionally employ the same tactic to attack the Speaker. What you claim she said, she never did. And the whackos at those meetings with the "Death to Obama" signs...are a bunch of astro turf thugs.

The right in this country is synonymous with failure. So, I guess rather than acknowledge the error of your ways, the righties have dug their little heels in and started screaming about their so-called persecuted by that mean old Nancy Pelosi. You guys are really sad.

I agree that the idiots with the "Death to Obama" signs are horrible and should be dealt with by the Secret Service. I have said as much in the past. That kind of nonsense has no place in the debate.

The rest of the matter is laughable. You accuse the right of the very same tactics that the left seemingly invented and employed with malice during George W. Bush's administration. Where was the fear of over-heated rhetoric causing possible violence there, Dave?