Brief Built To Spill Wrap Up 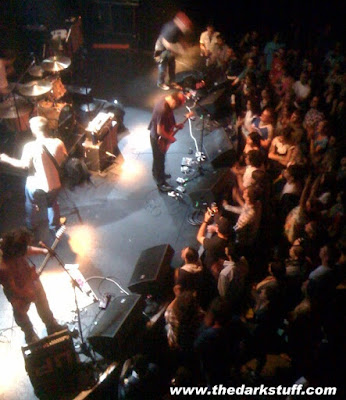 Built To Spill 9/23/09 @ Slowdown, Omaha, NE
Last night's Built To Spill show at Slowdown was yet another in a long line of great concerts I've seen by this classic band. Last night might have been the 9th or 10th time I've seen them, and once again, BTS delivered the goods.

I was a little worried that the set would be comprised mostly of tunes from their forthcoming new album. I hate when bands play too much new stuff, especially when it has yet to be released. Last night, however, the band played maybe two brand new ones, and the rest spanned their entire career.

After the band's 100 minute set, BTS leader Doug Martsch dee-jayed for the rest of the night. I have no idea what he played since I didn't stick around. But, I'm guessing it wasn't your typical club DJ material.

I'm now very much looking forward to the new Built To Spill album, There Is No Enemy, which comes out October 6.
Posted by Dave Splash