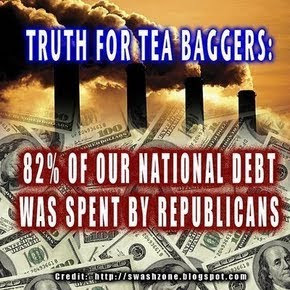 This one is just too funny. The anti-tax, anti-Obama teabaggers who argue that any service involving the government is socialism are actually complaining that there weren't enough government services available for their anti-tax, anti-government rally in DC. How's that for irony. From thinkprogress:

Last weekend, tens of thousands of right-wing protesters invaded Washington, DC for the 912 March. Not only were they rallying against President Obama’s plans for health care reform, but more generally against “socialism,” government-run services, and too much taxation.

A large number of the tea party protesters relied on DC’s transit system to get around the city. The Washington Metropolitan Transit Authority (WMATA) reported that on Sept. 12, metrorail ridership was double compared to an average Saturday. The Washington metro, of course, is public transit — in other words, it’s run by big government. Nevertheless, Rep. Kevin Brady (R-TX) has written a letter to WMATA complaining that the service wasn’t good enough for the tea baggers.

In his letter, Brady also complained that overcrowding on the metro trains
“forced an 80-year-old woman and elderly veterans in wheelchairs to pay for cabs” — in other words, to rely on the non-government-run transportation system, which tea party protesters would presumably want to support.

As for Brady…John Cole points out that when a bill containing $150 million for emergency maintenance funding for the DC metro system came up this summer, Brady voted against it.

DailyKos made this list of all the socialism used by the teabaggers:

* Those tens of thousands of teabaggers used the facilities of the government-run National Park system.

* They left a significant amount of trash behind in garbage cans (mostly anti-socialism signs, of course) for the government-run sanitation department to dispose of.

* They arrived at the Tea Party on government-built and -maintained roads.

* They relied on government-funded police to provide security.

* Many of them are on government-provided social security and/or Medicare.

* And, most ironically, they used government-run public transportation to get around the city.

What a bunch of commies....
Posted by Dave Splash

I am guessing they did all those things mentioned in the Kos list and probably didn't give much of it any real consideration. I truly think the cognitive disconnect has gotten that bad.

For what it's worth, you seem to be misunderstanding both what the rally was about and what most republicans view as the responsibility of government.


Public transportation (buses, trains, etc), insfrastructure (roads, sidewalks, sewage, etc), and services (police, trash collectors, schools, etc) are all fine and we are happy to pay taxes for those things.


However, purchasing stock in banks, purchasing bad investments from banks, and guaranteeing private loans are not things the government should be doing with tax dollars.


Also, spending more than we, as a country, have is also not acceptable. It wasn't acceptable for the previous administration (and some of us were complaining then, too, but the true numbers and effects weren't visible yet)and it isn't acceptable for this administration. This is also not an attack on President Obama. Last I checked, Congress passes laws, not Presidents. The protest was more for our congress than for the president although he obviously supports this excessive spending outside the scope of the Federal Government.


I almost didn't post because reason seems to be leaving both sides of the argument but if you are interested in a little informed insight to "the other side" I hope it was helpful.

Well, Michael, for what it's worth, I would take you teabaggers more seriously if you had done at least one protest prior to January 21, 2009. You claim you did, but there is no evidence of it.

Sorry, but to say this is not an attack on President Obama is disingenuous at best. What about all those Obama is a Nazi, Commie, socialist, witchdoctor signs?

It's not that I am not capable of understanding the other side. I do. But given the chance to do things your way, with a GOP controlled Congress, a Republican president, and a conservative Supreme Court, you didn't practice what you preach. And you did nothing about it except blame the other side for your failings.

The country moved steadily to the right for almost three decades, enacted your trickle down economic philosophies (tax cuts for the wealthy, deregulation of business) and it resulted in the greatest economic collapse in 70 years!

The country voted for a new direction in just about everything. So, for those who supported, fully, the old, failed direction to get so irate because the nation is going another way, is comical. President Obama's policies have barely even been enacted yet, and right is already claiming failure. Rather than adopting a "wait and see" attitude and hoping for the best, the right has decided to go to town hall meetings and shout down and intimidate anyone who dares to disagree.

No offense, but the entire teabagger movement is a joke to me. It's a way of venting for the same people who voted for McCain/Palin or Ron Paul. It's sore loserism more than anything else. That's how I see it, anyway.

I appreciate your comment, however. Stop back any time.

Thanks for the great feedback. I do have a few comments for your concerns. Let me get the one that bothers me the most out of the way first. Folks calling Obama a Nazi or witchdoctor are just off their rocker and I'm afraid every movement has it's douche bags.

As for socialist or communist, I think it's too early to call communist but I think it's fair to say socialist in philosophy. I'm originally from Canada, without doubt it is a socialist government with a strong Central (Federal) Government and controls. There are pluses and minuses to our setup back home. I prefer the American setup so I stay here.

You're right, there weren't protests about debt prior to 1/21/09. For my own part, I didn't start really caring or understanding about US government economics or politics until about 3 years ago so I've had some catching up to do to understand the existing system. I think that for the rest of the nation, most people still believed the bill of goods that debt is good. As a nation we've been sold that lie for decades now it has taken this recession and a great deal of heartache for folks to realize that debt is not good at any level.

As for the not practicing what we preach with the GOP congress, you're absolutely right. Many of my friends who have been Republican are disgusted with many of the Republican Congressmen for how they have voted on issues. I have been finding myself moving more Libertarian but even at that I still hold that there is a role for Government to play. I just think many (not all) social services could be (and often already are) delivered more efficiently by non-profit organizations than government.

I don't believe tax cuts or the trickle down economic philosophies did as much harm as people think. The two main issues that sparked this recession were a sudden spike in foreclosures and a sudden loss of actual capital in the banking system. Here's what I have researched about that. First, many people at first were losing their homes because they were sold mortgages they couldn't afford for a wide variety of reasons. Some were investors going for risky mortgages that required they sell within a few months. Others (like a friend of mine were told they could afford to buy a house on SSDI) got ARM loans that changed their payment within a few years. When it came time to pay the piper and these loans started getting defaulted on in large numbers it caused a chain reaction in what were called Credit Default Swaps.

The short version of a CDS is that it's nothing short of gambling at the races. Company A gives a mortgage to Joe knowing Joe will default because he can't afford a house. Company A then pays Company B a monthly premium with the stipulation that if (when) Joe defaults, Company B will pay Company A the loan amount. There are, of course, insurance companies for this but they wouldn't touch these loans and nobody had enough capital to back the amount of loans out there made in this way anyway. That's when the banks and financial institutions started failing. They were on the line for all of these defaults and had promised more than they had assets to back. This wasn't due to de-regulation, there were never regulations for this because it was seen as a private contract between two entities. This was incomplete regulation, not de-regulation These contracts should not have been allowed. That's why insurance companies are regulated.

However, that's why I was appalled at the US government providing the cash to cover the losses on the "gambling debts". You don't stop doing something wrong until you're punished. These banks were rewarded for their bad decision. There are many small banks in this country that are doing just fine because they stayed out of that market.

Yes, there is a great deal of venting done by the tea baggers. But then, it seems to me that loud venting and pointing out of problems is how change happens in this country. Whether it's anti-war protests, anti-segregation protests, equal rights movements. That's how you make change in this country and there are a growing number of people who want to see the government focus only on what it should focus on and let the people handle the larger problems and issues of this country.

Mr. Wigle, your comments and insights are dead on accurate!

With you having come from Canada, it would be interesting to hear your thoughts on the Canadian health care system and what the U.S. is currently proposing. Not sure that this is easily done on Mr. Splash's comment section here though...

Well, since you asked... and you're right, it's off-topic for this thread... check out my personal blog.

Sounds like Pain and Wigle have made themselves a conservative love connection. (ha ha)