I mean besides Twitter and Michelle Malkin's...Check out: obamaisliterallyhitler.tumblr.com. I learned there that both Barack Obama and Adolf Hitler had dogs. Hmmmmm.....Maybe those wingnuts are right. He is a Nazi. Shit. Maybe I'm a Nazi, too.... 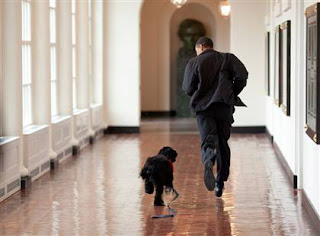 Just look at this Nazi-like behavior. Have you ever seen a president act so much like Hitler as this? I WANT MY COUNTRY BACK!!
Posted by Dave Splash

I don't know. If it's on the internet, then it must be true, right?

I thought my tone conveyed that I knew this site was a joke.

There's a reason they're called 'nutters'.

Scheisse... I think I will steer clear of that site. Thanks for the warning!