Of All the Stupid Republicans, Apparently Nebraska's Are the Stupidest 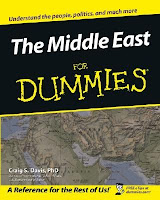 The Omaha City Weekly went to Nebraska Senator Ben Nelson’s healthcare town hall meeting on Wednesday, August 19th at the University of Nebraska Medical center. The rhetoric surrounding the healthcare debate has become so toxic that it is difficult to find the right questions to slice through the rhetoric, much of it tinged by fear-mongering and demagoguery.
At least one thing is clear to the City Weekly; that each side is convinced that the other is ill informed. So the City Weekly devised a little quiz that might shed some light – if not on the veracity of competing healthcare claims – then at least on the political savvy of those making them.

Presented a blank map of the Middle East and surrounding area - one with county names removed – those attending the town hall were asked to point out Iraq, a country where we have waged war for over six years.

The idea was that those who consider themselves to be well informed on the state of America today should at least be able to identify a place where we have shed blood in a conflict that has lasted longer than our involvement in World War II.

The Omaha City Weekly tested 40 attendees each among those who identified themselves as either firmly for or against the proposed HR 3200. Those polled were evenly split between gender and age groups. Results are further broken down by race…

Oh, whom am I trying to kid? With an estimated 1,200 people in attendance, the City Weekly, try as we might, could not find a single African American who was against HR 3200.

Granted, this was a thoroughly unscientific poll with a tiny sample size. It would perhaps be unfair to infer that those who can’t find Iraq on a map may be equally uniformed on other issues - like the much touted “death panels,” a meme whose vileness is surpassed only by its insipid cruelty.

So forget the numbers.

More telling was the startling reactions I got while conducting the test. Pro-reform people, even those geographically challenged few who laughed out loud at the futility of the task before them, portrayed a uniformly agreeable front. Most gave a knowing, touch-like nod and smile. I received no negative comments, none at all, from that group.

The same could not be said of the other camp. Far from it.

One gentleman practically knocked the clipboard out of my hand in jabbing - angrily and correctly – at the country that (John Kerry was right) represented the wrong war at the wrong time in the wrong place.

Many sneered. Most at least glowered. Four accused the test itself of being somehow biased. About half way through the polling I mistakenly blurted out “yes” when I meant to say “no” after a Tea Partier asked if they had answered correctly in this little game of “where’s Waldo?”

“So much for your gotcha politics,” the woman with more tattoos than teeth snarled. “And you want to say that we are all so stupid!”

Think about that for a moment. She knew that hers was what could only be described as a wild guess. She knew that she didn’t know the location of Iraq. And yet when told that her answer was correct she became smugly defiant, sending me away shaking my head at such blatant disingenuousness.

Accustomed to being lied to by her own party and by the right wing noise machine, she apparently didn’t think twice about lying to the media – and to herself.

And then it hit me. I must always answer “yes,” even when an answer was incorrect. Not a single pro-reform person gave me a “so there”-style response, but five on the other side gleefully did, including four who had answered incorrectly.

Perhaps saddest of all was the Viet Nam vet who spat, “Why the hell should I care where Iraq is?”

Why indeed.
Posted by Dave Splash

I assume that this "journalist" was a typical objective observer that did not have a pre-conceived agenda BEFORE ever trying to collect the evidence for his already written story, did he?

I didn't check his voter registration card, if that's what you mean.