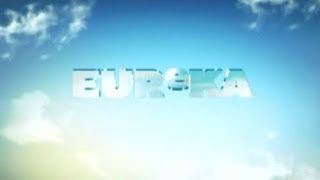 In the absence of some of my regular shows (and since I have little else to do these days but watch TV), I have just started watching the SyFy show, Eureka. I think the series is in its fourth season or so, but since I am new to it, I am renting the first season from Netflix.

It's a decent show. It reminds me a little of Northern Exposure, in that the show is set in a small, out of the way town populated by quirky locals, and an outsider is thrust into the community against his will. But instead of it being a remote Alaska town with a Jewish doctor from New York being sent in (Northern Exposure), Eureka is a small town in Oregon, populated by geniuses, and the outsider is a US Marshall who is assigned to be the town's sheriff. The whole "what the hell am I doing in this crazy place" thing is where the similarities end, however.

I'm still in season one, so I'm just getting a handle on all of the secret work going on in this town, and who all of the major players are on the show. But, hey, I'm digging it so far...
Posted by Dave Splash