How Far Is Too Far in the Right Wing Media? 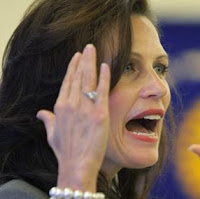 Rush Limabugh referred to President Obama as a "magic Negro." He then compared him to Hitler on multiple occasions. Glenn Beck said President Obama has a "deep seated hatred for white people" and asked why there couldn't be military tribunals to try Obama and his cabinet. Republican Congress member Michelle Bachmann told her constituents to take up arms against the federal government. No one on the right condemned it at all.

Now, Glenn Beck has joked about murdering the Speaker of the House, Nancy Pelosi on his TV show on Fox News. Yet again, no condemnation from the right, no apology from Beck or Fox News. All of the hate speech coming from the right, and the endorsement of violence and chaos at town hall meetings held by Democrats is being billed as political discourse by the media and those on the fringe right. But what would have happened if, in 2003, Keith Olbermann had joked about killing Dennis Hastert or Democrats tried to disrupt a Republican function? Jail time, plain and simple. And it did happen to numerous protesters.

I would just like to know if there is anything Limabugh, Beck, Hannity, et al, could say that would be "too far" for the right and their supporters in the media? Anything?
Posted by Dave Splash

WOW, I sure would like to see and hear your sources for about 90% of that garbage. Daily Kos working overtime with DNC talking points today, Mr. Splash?

So, Paine are you saying 90% of that was never uttered? Here's some proof for you, will actual recordings suffice? Now, I know this will pain you to go to a liberal, pinko website like Media Matters, but they have actual recordings, so you can't deny the accuracy of it. This will barely scratch the surface. Let's begin:

More Limbaugh race stuff: http://mediamatters.org/countyfair/200901220002?show=1 ("We are being told that we have to hope he succeeds, that we have to bend over, grab the ankles, bend over forward, backward, whichever, because his father was black, because this is the first black president." "He is not black")

This stuff did happen, and it is barely even the beginning of the unhinged, no holds barred, political terrorism being deployed by the right.

As my time permits, I will listen to your links and get back to you. If I am wrong, I don't have a problem admitting it. Too bad most folks on both sides of the debate aren't the same way, the left being particularly egregious in this though.