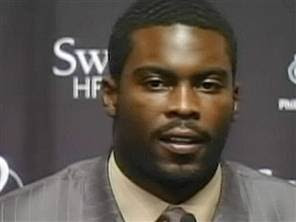 This human piece of shit, Michael Vick, has just been signed by the Philadelphia Eagles. Why a team with a QB as good as Donovan McNabb would bother with the likes of Vick is beyond me, but that's another issue. Vick was supposedly suspended from football forever after it was revealed that he is little more than a sadist who tortures cats and dogs for pleasure and money. Most people just dismiss his activity as "dog fighting." It was much, much worse. He went to jail, but only served 18 months of a two year sentence. Naturally, he was allowed back into the NFL since being an immoral scumbag does not disqualify anyone from playing, and making money for the league.

Vick tortured cats and dogs. He hung animals by a noose, he electrocuted them, he body slammed them into brick walls, and he placed small, sometimes infant animals into cages with already violent adult pit bulls so the larger animals could get a "taste for blood." All of this done while his friends and business partners cheered along. A person does not get much lower than that. How many millions of dollars is an animal torturer worth these days?

I don't care how talented an athlete Vick is, or that he "paid his debt to society." The man has no place in professional sports, and no place in the public eye. He should have been shunned for life by his peers, and the lifetime ban from football should have lasted more than 2 1/2 years.

I hope the Eagles have a terrible season, and that the coach is pummeled with garbage from fans every single Sunday. Fuck the Philadelphia Eagles.
Posted by Dave Splash