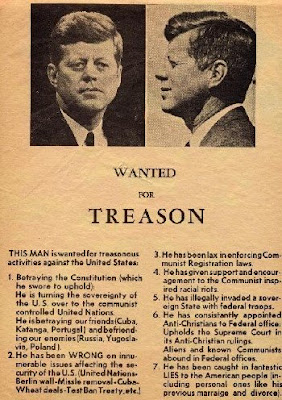 This flyer was distributed in Dallas a few days before JFK's assassination in 1963. Among the accusations made by the lunatic fringe wingnuts of 1963, are that JFK "has been wrong on innumerable issues affecting the security of the United States" (wrong by whose standards I wonder and remarkably similar to the charges the right makes now about Obama) and that he has told "fantastic lies to the American people including personal ones like his previous marriage and divorce." Of course, JFK never had a previous marriage, and there is nothing at all that contradicts this. It is baseless. Just like the current made up controversy about Barack Obama's birth certificate.

I find this fascinating and scary at the same time. You can find a bigger picture of the flyer here.
Posted by Dave Splash

Do you want to know the truly ironic part of this story. JFK could not be the Democratic party's nominee for president in today's party. He was far to fiscally conservative and he was far more of a defense hawk. That would be the kiss of death in a party where the FAR extreme left is the leadership of today's Democrats i.e. Pelosi and Reed. Hell, in many respects JFK was more conservative than George W. was; how's that for infuriating liberal moonbats over their beloved icon? Cheers sir!

I have heard that similar line of "reasoning" regarding JFK said a number of times before, and it still does not ring true. JFK dealt with the economic and national defense realities of his day, not simply ones in his mind. He was not a rigid ideologue, which means he has no place in conservatism. He would be a Democrat today, just as he was then. If there is any revising of that ilk that makes sense, it is that Pres. Eisenhower would, without question, be a Democrat today. Considering his chastising of the military industrial complex, his early federal enforcement of civil rights, and his use of large federal projects (i.e. interstates), the fringe that controls the GOP would not allow Ike in their party now. In fact, the fringe right said Ike was a commie all throughout his time in office. Puts Obama in good company, I think.

But back to JFK, he never would have lied and ginned up "evidence" in order to invade a country without serious weapons that did not attack us, set up a piss-poor occupation with too few troops to get the job done, and allow the people who did attack the US to remain free for 8 years. That is the Republican hawk, and JFK is no Republican hawk. He is far better than that.

I will agree overall with your assessment of Ike.

I still disagree with your assessment of JFK. At best for your cause he would be on the right side of the blue dog Democrats.

I won't even bother responding to the left-wing talking points of "Bush lied to get us into war" crap. It would waste both of our time since you obviously don't believe the truth of the matter there, sir.

No, I believe the truth. The part about Bush wanting to go to war in Iraq - facts and evidence be damned - and utilizing perhaps the greatest propaganda campaign of all time to sell it to the American people. Chairman Mao has nothing on Bush/Cheney.

Fact and evidence be damned...look at what the Democrats are trying to shove down the people's throats with Obamacare. THAT is what propaganda based on lies truly is.