Miraculously, I was able to get myself to Slowdown last night in time to catch the last 30 minutes or so of The Breeders show. Seeing opener Times New Viking was out of the question since I was on-air from 9-11, and they were scheduled to start around 9:15. Too bad, because those guys are excellent. Next time.

I had it all set up. I was going to end my radio show with the full version of Sonic Youth's "The Diamond Sea" (all 19:36 of it), blow out of the studio early, haul ass to the club, and hopefully catch most of The Breeders set. I came so close...

Something must have happened at the station recently, because there were signs posted all over the place saying all DJs must call for security to be escorted to their cars before leaving. That delayed my departure a bit. Then, while motoring down the highway, I saw that the exit I needed to take was closed, and I had to take a detour. This took me about five miles in the wrong direction, only to then turn me back around and put me back on my exit, coming from the other direction. Does that make sense? So, I got on the right road, and was just two minutes away when I drove right into the massive crowd of people exiting a nearby Taylor Swift concert. FUCK!! Twenty thousand people in ten thousand cars all in my way! 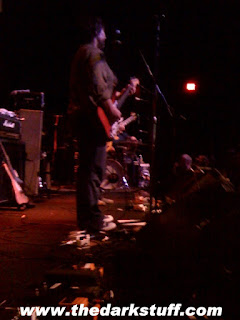 With some quick maneuvering on my part, I ducked down an alley, and emerged down the block from Slowdown. I parked my car and ran inside. By this time, it was after 11, and the band had started at 10:15. But I was determined to enjoy whatever was left of the show, and I did. Kim and Kelly Deal were in fine form, and seemed to be in a great mood. Attendance was a little light, so I was able to maneuver to the front of the stage pretty easily.

I missed most of the band's best known material (i.e. "Cannonball") but I did catch a great version of "Drivin' On 9" during the encore. I bumped into Jeremiah from the band Box Elders who promised to get me a copy of that band's new record this week. Yay. I guess it wasn't a total loss.

Based on the attendance, I doubt the Breeders will be back in the short term, but I'd like to see them again some day. I realized last night, that it had been since the 94 or 95 Lollapalooza that I had seen the band. Of course, they did take eight years between albums, and then Kim went back with the Pixies...
Posted by Dave Splash