Why Do The Republicans Hate This Guy So Much? 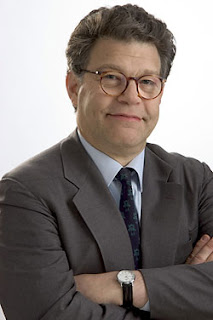 Note: The following was written by Benjamin Sarlin in January, after Al Franken was initially certified the winner of the Minnesota senate race. All interviews were conducted at the time.
(The Daily Beast) With Tuesday's Minnesota Supreme Court decision, Al Franken's long journey to the Senate may be coming to an end. But his unique role as the Democrat the right loves to hate the most will continue no matter what.

Though legal wrangling may prevent him from being immediately seated, comedian Al Franken was certified the winner in Minnesota's Senate race today with a lead of 225 votes, putting an end to a weeks-long recount battle. With the usual hapless Democrats failing to generate much outrage, Franken is in line for an even more prestigious honor: the right wing's favorite punching bag.

"Al Franken is a very tempting target because he is so outrageous," said Republican strategist Brad Blakeman. "It's similar to Joe Biden—we hope that Al Franken is the gift that keeps on giving."

Bill O'Reilly called Franken "a smear merchant and a rank liar unqualified for any elected office," and "a far left extremist" who "traffics in hate."

Franken's prominence comes at a time in which Republicans have struggled to find an easy Democratic bogeyman. Barack Obama is still overwhelmingly popular. Hillary Clinton, formerly the party's nemesis, earned a newfound respect among conservatives as the voice of moderation on withdrawal from Iraq. Rod Blagojevich is too local. Harry Reid and Nancy Pelosi are a particular favorite of Matt Drudge, but relentless attacks on them failed to prevent heavy losses in 2006 and 2008. Ted Kennedy, suffering from brain cancer, is off limits.

So Franken provides an inviting target. His style of politics runs directly counter to the civility preached by the incoming president. Franken is author of the bestsellers Rush Limbaugh Is a Big Fat Idiot and Other Observations and Lies and the Lying Liars Who Tell Them, which trashed conservative talk hosts like Bill O’Reilly and baited some to respond with their own heated attacks.

Even while on the campaign trail, where Franken tried to project a senatorial gravitas, he found time to hit the right where it hurt. Politico reported that he was behind one of the most brutal Saturday Night Live sketches of the election, in which John McCain approves a series of increasingly horrifying attack ads against Obama ("Barack Obama has fathered two black children...in wedlock").

If Obama's strategy is to dial back the blue/red civil war to a detente, Franken's is to escalate it to World War III. Now Franken is poised to become that rare politician whose very existence is a wedge issue to be exploited.

For GOP talkers and apparatchiks, Franken's resume is almost too good to be true. He pushes such time-honored Republican buttons as hatred of Hollywood entertainers (in addition to Franken's own celebrity, many top stars have donated to his campaign), anti-elitism (he’s a Harvard graduate), and prudishness (his dirty jokes were a constant source of attacks during the Senate campaign). As if that weren't enough, commentators like Sean Hannity have suggested that the complicated recount process has been less than aboveboard, raising the specter that a Franken win will be illegitimate.

FOX News commentator Bernard Goldberg, who has been criticized in Franken's books, believes Franken is a natural target for conservatives, given his high profile and combative style.

Goldberg added that it's "sort of fun to take shots at him," but if Franken adopts a "grown-up" attitude in the Senate, he might spare himself becoming the right's favorite nemesis.

One Republican political consultant, Stephen Marks, warned that GOP officials should lay off Franken unless he provides clear justification for their wrath, as pre-emptive attacks could come off as “desperate” and work to the Democrats' advantage.

Marks added that Franken will likely be on his best behavior after he takes office.

“Don’t expect anything crazy out of him,” Marks said. “The last thing he needs to do is reinforce the image of a comedian who got elected. He has to get the respect of his peers in the Senate.”

Even before his Senate run, however, Republicans experimented with using Franken as a proxy attack on other politicians. In 2006, the Ohio GOP issued a news release attacking Senate candidate Sherrod Brown for associating with Franken that included a Photoshopped picture of the comedian in a diaper. During this year’s campaign, Michelle Malkin described him as "an angry, unstable man." And Bill O'Reilly called him "a smear merchant and a rank liar unqualified for any elected office," and "a far left extremist" who "traffics in hate."

After the recount started and the race became the only electoral game in town, conservative pundits piled on, too. "The reason he won't quit is he doesn't know how to get a real job," Rush Limbaugh told his listeners. "The idea that this country is now a sitcom is exemplified by how close that stupid election was in the first place."

Whether Obama will succeed in installing a new civility is anyone's guess, but if there's anything Franken's victory makes clear it's that the president-elect's plan for reconciliation is not the only game in town. Look for the Al Franken show to be the tonal opposite of change we can believe in.
Posted by Dave Splash

All Franken has to do is keep a low profile and be a good Democrat. The more the Right rails against him, the sillier they'll look.