When The Going Gets Tough, Palin Gets Going 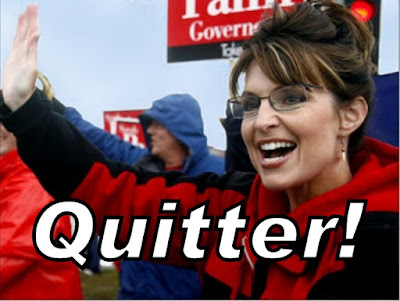 Quitting seems to be a pattern for Mrs. Palin. She has a lengthy history of bailing.
And what would Sarah Palin insanity be without her #1 defender, MSNBC's Mika Brzezinski, chiming in about Sarah being omnipotent or something; and claiming those who disagree with Palin about anything are not "real Americans." If Brzezinski isn't the dumbest person on TV, then she is in the Top 3.
It's interesting to note, then, that according to Mika Brzezinski, President Obama was elected without any "real American" votes, since Palin and her "crowds" represent the "real" Americans. Huh. Interesting concept. Great journalism indeed.

Gotta love that internet, Think Progress dug up this quote from Palin about female politicians complaining about excessive criticism: "When I hear a statement like that coming from a woman candidate with any kind of perceived whine about that excess criticism or you know maybe a sharper microscope put on her, I think, “Man that doesn’t do us any good — women in politics, women in general wanting to progress this country.”
Posted by Dave Splash

It's one America, obviously. The only way the doofii can have a shot at winning is to create such false divisions, touting their idols as "real Americans" while claiming those who disagree "aren't real Americans".

Oh well. When it comes to Palin, what's the old locker room saying?

Except in Republican political circles...then the rules apply only to Dems. Quitting is the new winning in the GOP! You and your librul bias will never get it.

Bye-bye 'Caribou Barbie'. Don't let the moose trample you on your way out.