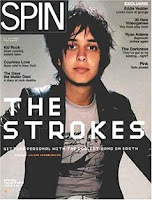 Julian Casablancas, lead singer of The Strokes, has just completed his first solo album, Phrazes For the Young. The record will be released later this Summer, and was recorded in L.A., New York, and Omaha. Yes, Omaha. Bright Eyes' Mike Mogis produced some of the tracks. More information can be found at his website: juliancasablancas.com.
Posted by Dave Splash